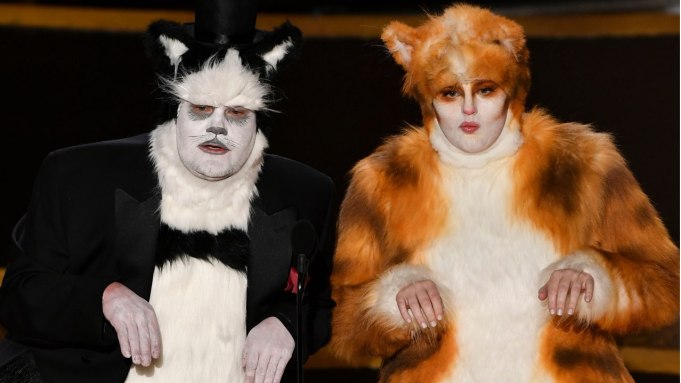 Like Thor’s computer-generated hammer raining down on his enemies, Hollywood’s Visual Effects Society is speaking out against last night’s Academy Awards telecast for making them the butt of a joke.

In a scathing statement, the group of more than 4,000 artisans expressed offense over the presentation of the Oscar for best visual effects — which featured “Cats” stars James Corden and Rebel Wilson decked out in fur suits, poking fun at their musical misfire on stage at the Dolby Theatre.

“Last night, in presenting the Academy Award for outstanding visual effects, the producers chose to make visual effects the punchline, and suggested that bad VFX were to blame for the poor performance of the movie ‘Cats,'” the statement said. “The best visual effects in the world will not compensate for a story told badly. The Visual Effects Society is focused on recognizing, advancing and honoring visual effects as an art form — and ensuring that the men and women working in VFX are properly valued.”

In their perfunctory award show banter, Corden and Wilson joked that “nobody more than us understands the importance of good visual effects.” The line elicited wide applause as nominees like Charlize Theron, Margot Robbie, Florence Pugh and Renee Zellweger erupted in laughter. The VFX group is contesting the notion that they are to blame for the global flop, which has earned only $75 million at the worldwide box office in nearly two months of release.

“On a night that is all about honoring the work of talented artists, it is immensely disappointing that The Academy made visual effects the butt of a joke. It demeaned the global community of expert VFX practitioners doing outstanding, challenging and visually stunning work to achieve the filmmakers’ vision. Our artists, technicians and innovators deserve respect for their remarkable contributions to filmed entertainment, and should not be presented as the all-too-convenient scapegoat in service for a laugh,” the statement continued.

Representatives for the Academy of Motion Picture Arts and Sciences had no immediate comment on the matter.

This is not the first time the community has spoken out in defense of its own. A month ago, prominent VFX artists from films like the live-action “Lion King” and “The Jungle Book” defended the “Cats” team, saying their work was visionary — but filmmakers like director Tom Hooper are responsible for ensuring an audience buys the aesthetic world of a film. And, of course, the story.

“Moving forward, we hope that The Academy will properly honor the craft of visual effects — and all of the crafts, including cinematography and film editing — because we all deserve it,” the statement concluded.