Carole Lombard came to Hollywood from the Midwest at the age of 7 and was making Westerns at Fox by age 9.

The legendary star of such classics as “My Man Godfrey” and “Twentieth Century” would rise to become a high-paid performer in the middle of the Depression. Lombard was known for her tomboy style, for throwing great parties, for her marriages to megastars William Powell and Clark Gable. She was also destined to be Hollywood’s first casualty of World War II. She was only 33 and at the peak of her career.

“Carole Lombard gave her life in the service of America,” Will Hays, president of Motion Picture Producers and Distributors of America, told Variety in January 1942 as the shock of Lombard’s death in a plane crash outside Las Vegas spread through the industry.

“Carole Lombard died in the line of duty. She was the first casualty of show business in this world war. She was in active service on a mission in defense of the United States —  selling Defense Bonds — when death suddenly overtook her in the skies,” Ungar wrote.

At a time when the country was polarized about whether to enter the conflict, Lombard had been an outspoken supporter of President Franklin D. Roosevelt. It was no surprise that she was among the first in what Variety then referred to as “the film colony” to raise her hand to help the war effort. U.S. Treasury officials put the movie star to work selling war bonds to finance the enormous military and industrial response to Japan’s bombing of Pearl Harbor on Dec. 7, 1941.

On Jan. 15, Lombard and Hays kicked off the nation’s first bond drive for WWII at a rally in Indianapolis. The setting was personal for Lombard, as a native of Fort Wayne, Ind. The Treasury Department’s goal was to sell $500,000 worth of war bonds and stamps; Lombard’s energetic pitch to Hoosiers at the city’s Cadle Tabernacle wound up bringing in more than $2 million.

After the event, Hays (of Hays Code fame) sent a wire to Gable, who was not only Lombard’s husband but also chair of the Hollywood committee in charge of assigning wartime assistance jobs to his fellow movie stars.

“Great day here today. Carole was perfect. Really, she was magnificent and they sold in this one day $2,017,513 worth of bonds, with a quota of only $500,000. Every one deeply grateful I feel I must send you this expression of my personal appreciation,’ ” Hays wrote, according to Variety’s coverage.

Accompanying Lombard on the trek to Indianapolis was her mother, Elizabeth Peters, and Otto Winkler, a longtime MGM publicity executive who had for years handled Gable’s PR needs — a big job for the star (known in the biz as “the King”) of “Gone With the Wind,” “It Happened One Night” and “Mutiny on the Bounty.” Winkler had been best man at Gable and Lombard’s 1939 wedding.

Lombard, Peters, Winkler and others got on a commercial TWA flight at around 4 a.m. on Jan. 16 that stopped in Albuquerque. At that point, four passengers got off to make room for 15 Army Air Corp. aviators and enlisted men. From there, the flight stopped again in Las Vegas. Not long after it took off again for Burbank airport the plane hit the high peak of Nevada’s Mt. Potosi, about 50 miles southwest of Las Vegas. 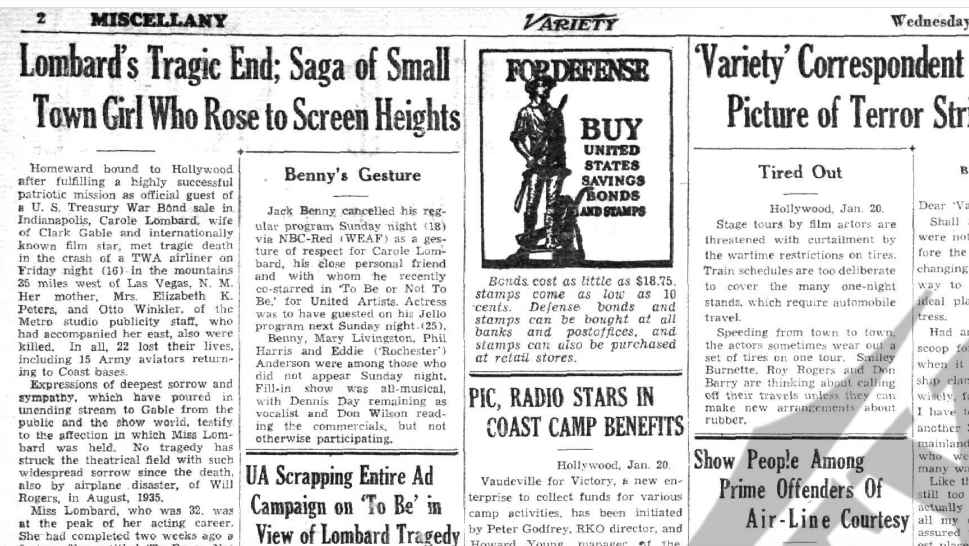 The wreckage was strewn for miles. The mountainous crash site was hard to reach in the heart of winter. The violent impact made bodies of the 22 victims difficult to identify. Gable, who had reportedly been waiting for his wife at Burbank airport, chartered a plane and headed to the scene as soon as he learned of the tragedy.

As the sad news sunk in, tributes from her industry colleages were shared widely through the pages of weekly Variety and Daily Variety. Lombard was revered by crew members and studio staffers far and wide as the consummate pro, the former Mack Sennett bathing beauty who worked her way up from two-reelers as a child to top billing by dint of talent and dogged determination. Hers is one of the stories that cemented an enduring Hollywood cliche. “Her life typified the popular conception of Hollywood — small town girl from Fort Wayne achieving riches and fame,” Variety observed in its obituary for Lombard.

Born Jane Alice Peters on Oct. 6, 1908 (Variety initially cited her birth year as 1909 and her age as 32 at the time of the crash), Lombard relocated from Fort Wayne to Hollywood with her mother and brother when motion pictures were in their infancy. By the time she was a teenager, she was appearing in oaters with popular star Buck Jones. She briefly attended Fairfax High School, but her star began to rise when she was cast in “bathing beauty” shorts produced by Mack Sennett. Lombard’s first reference in Variety came with a casting notice in the Nov. 23, 1927, edition for Sennett’s “two-reel comedy burlesque on ‘Carmen.’ “

Lombard moved on to contracts with Pathe and a seven-year hitch at Paramount Pictures, where she developed her reputation for comedy and met her first husband, William Powell. She was married to the future star of “The Thin Man” series from 1931-33. As her career blossomed, Lombard worked tirelessly, making movies for MGM, Columbia Pictures, Universal Pictures, RKO, Warner Bros. and Selznick International Pictures. Variety’s obituary for Lombard noted that she was a true child of pictures who never once appeared professionally on stage. She earned her only Oscar nomination for her work in the 1936 romantic comedy classic “My Man Godfrey,” in which she co-starred with Powell after their split.

“At that time, 1935, she was widely publicized as ‘the best dressed woman in Hollywood,’ and an inventor of novel parties, such as the renting of concessions on the amusement pier at Venice for a social function!,” Variety noted in Lombard’s obituary.

Lombard was hailed for her loyalty to crew members over the years, and for her lack of pretension.

“Many a star felt the sting of her salty rebukes, but to rank and file she was a great guy— an appellation reserved for very few in the picture business. The humble in the studios feel her loss far more genuinely and keenly than the marquee tribe,” Variety wrote.

After her marriage to Gable, Lombard developed a reputation for turning down plum roles in order to coordinate her work schedule with his. When not on the job, the two were reported to spend most of their time away from Hollywood’s social scene out at the 20-acre ranch in Encino that Gable and Lombard bought a few months after eloping in Kingman, Ariz. on March 29, 1939. Part of Lombard’s legend in this period was that she took up shooting and hunting in order to enjoy vacations with her outdoorsy husband.

On Jan. 12, 1942, Lombard, Peters, Winkler and others set off from Los Angeles by train for Indianapolis. Lombard had been expected to also return home by train but she opted to fly at the last minute, reportedly over the objections of her mother and Winkler. Later, reports surfaced that she was trying to get home faster to head off a blossoming affair between Gable and a young Lana Turner.

“She died for her country,” the Treasury Department said of Lombard in a statement. President Roosevelt also paid his respects to one of his most enthusiastic Hollywood supporters.

“Mrs. Roosevelt and I are deeply distressed. Carole was our friend and guest in happier days. She brought great joy to all who knew her and to the millions who knew her only as a great artist. She gave unselfishly of her time and talent to serve her government in peace and in war. She loved her country. She is and always will be a star, one we shall never forget or cease to be grateful to,” Roosevelt said.

“She was just a down­ to ­earth human, and always wanted folks to know it. She never took advantage of employer or employee. She gave her all in loyalty and ability to the picture business — setting an example that many others in the industry can and should follow. She was a regular fellow. The industry will always idolize her memory, and the greatest monument that can be erected in her honor is for all of us in show business to follow through. Be soldiers of our country. Buy, and get others to buy unstintingly Defense Bonds. That’s what the film industry’s top star was doing when war claimed its first casualty from show business.”

Lombard’s death forced United Artists to make hasty changes to her last movie, Ernst Lubitsch’s “To Be or Not to Be,” an anti-Nazi satire featuring Lombard and Jack Benny as the leaders of a Polish theater troupe. The movie was “in the cutting room” with producer Alexander Korda at the time of the plane crash. Benny was so distraught by the loss of his co-star that he bowed out of his regular Sunday night NBC radio program that week. Variety later reported that two lines of Lombard’s dialogue related to “a woman in an airplane” were changed before “To Be or Not to Be” was released in March 1942, to great acclaim and big box office.

Lombard’s funeral was held on Jan. 21, 1942, when she and her mother were interred at Forest Lawn in Glendale. Spencer Tracy, Zeppo Marx, Myrna Loy, Fred MacMurray, William Powell, Louis B. Mayer, Marion Davies and William Randolph Hearst were among the few dozen guests. Variety reported that Gable was “white-faced and stricken” during the brief ceremony. (Gable would ultimately be laid to rest at next to Lombard even though he had two more marriages prior to his death in 1960.) A day later, Walter Pidgeon delivered the eulogy at the funeral for Winkler, a loyal MGM soldier who died “in the line of duty on assignment.”

As the U.S. adjusted to fighting another global conflict, the loss of one of Hollywood’s brightest lights became a potent example of the entertainment industry’s contributions to the epic battle against fascism.

“Our sorrow is deep. Yet, through it, we feel a pride in the memory of Miss Lombard and of Mr. Winkler. Both were soldiers in the service of their country. Our memorial to them will be the untiring efforts of all of us to carry on the great work they were doing so ably,” said Fred W. Beetson, chairman of the Hollywood Victory Committee for Stage, Screen and Radio, in January 1942.

One year to the day after her death, Lombard’s legacy was invoked when Indiana led the nation “in a vigorous 15-day war bond drive” that ended Jan. 15 with a $3.5 million haul. Indiana Gov. Henry Schricker attended a tribute dinner to Lombard held in Indianapolis to mark the year since her passing. At the event, Variety reported that a “transcription” recording of Lombard’s voice was played, giving her one last chance to urge the crowd to “carry on, buy more bonds, more bonds and more bonds until this war is won.”