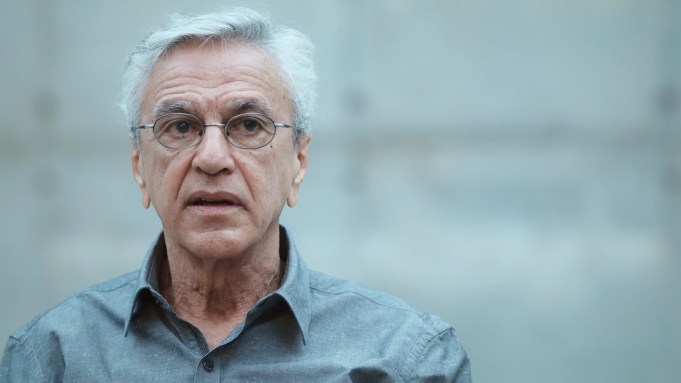 In 1968, during Brazil’s military dictatorship, singer-songwriter, Caetano Veloso – who the preceding year had been among founders of the revolutionary Tropicalia artistic movement – was arrested on trumped-up charges.

Veloso was taken from his São Paulo home to Rio de Janeiro, where he was placed in solitary confinement for one week and held behind bars for 54 days.

More than 50 years later, in the documentary “Narcissus Off Duty,” which will premiere on Sept. 7 at the Venice Film Festival, the multiple Grammy Award winner recounts his incarceration in detail and performs songs that sprung forth from this painful experience. (Watch the film’s exclusive trailer above.)

Directed by Renato Terra and Ricardo Calil (“A Night in 67”), the doc is co-produced by Veloso’s wife and manager Paula Lavigne’s Uns Producoes with Walter Salles’s VideoFilmes. Globoplay has acquired rights for streaming in Brazil.

Veloso and Salles spoke exclusively to Variety about the timeliness of this project just as Brazil’s president Jair Bolsonaro, a former military officer who encapsulates Brazilian military culture, is dangling the prospect of military intervention to ward off challenges to his presidency as he increasingly comes under investigations for alleged corruption. Excerpts.

More than 50 years have gone by. What prompted you to reminisce about your incarceration on screen now?

Brazil has a government that says that the military dictatorship was a good thing. And they are trying to cast it in a positive light. So it’s timely to talk about that period the way I do in the film now.

Was it difficult for you to conjure up all the details of what happened?

Not really. I have a very clear memory of all things that happened that day, and in those months. In fact I had written about it in my book “Tropical Truth.” There is a chapter in the book that tells the whole story. My manager, who is also my wife (Paula Lavigne), thought we should now do that on film. She invited a couple of directors who had done a wonderful work about a music festival…We were all going to do a complete documentary with many interviews and set locations, and things. But they started by interviewing me. When the interview – that we did in two sessions – ended, they decided that that would be enough.

Do you fear this doc could spark reaction on the part of the current government for creating a parallel between then and now?

There is always this possibility. But I don’t have much time to fear. I try to concentrate my actions doing musical things for the enlightenment of minds in Brazil. The thing is, there might be some reactions. And I should be afraid at some level. But in fact the situation now is different. Back then it was a dictatorship that started with a coup, and it was entirely military. Now we have a government that was elected and formally we are under a democracy. So reactions like punishing or censoring are more difficult to carry out.

How did the experience of being incarcerated impact your journey as an artist? Did it have an influence on your music?

It was inevitable that it would have an influence on my artistic creation and activity. No doubt. I composed a song while I was imprisoned, and then years later I wrote a song about the first time I saw a photograph of planet earth from outer space (while incarcerated). Of course my deep feelings about being alive, about being a person, all these feelings changed. And for a while I was kind of depressed after the imprisonment. And during my first year of exile in London I felt a lot less capable of deciding what I was going to do. I felt more passive in facing life. It was different. In the second year in London I started to feel like I was free to think and act. I started recording and singing. But the first record I made there I was still under this depressed state of mind. Some of the things I had wanted to do, such as stop composing songs and go around Brazil making films — all these things that I was planning — I just gave up. I didn’t have enough strength. So, yes. The fact that I was imprisoned the way I did, it did have a heavy consequence on my personality

On a personal level, was the experience of telling it in front of the camera liberating for you?

Well, this kind of thing is healing. It’s necessarily healing. When you get it off your chest it has a healing effect, you cannot deny that.

This project seems to be very close to you and VideoFilmes. Can you talk to me about how you embarked on it?

My brother João and I were struck by how much light the material filmed by directors Renato Terra and Ricardo Calil with Caetano Veloso shed on Brazil’s military dictatorship in the 60s and 70s, but also on our chaotic present. Like most Brazilians, we consider it a privilege to be Caetano Veloso’s contemporaries. His memories of imprisonment allow us to understand what the loss of freedom means on a personal, but also collective level. It is rare to sense such lucidity and humanity in one’s reminiscences — thus its universality. This is what brought us to the project.

There are quite a few docs out there about Caetano Veloso. What makes this one stand out?

Yes, and we actually shot a five-hour series on Caetano Veloso when he turned 50, which José Henrique Fonseca and I co-directed at VideoFilmes. It was an immersion in his extraordinary body of work, and life. “Narcissus Off Duty” takes this immersion a step further. The documentary directed by Renato Terra and Ricardo Calil’s unique strength lies in the fact that it is a search for the essential. Whatever is not fundamental — a word, a camera movement — does not belong in “Narcissus Off Duty.”

Was it difficult to mount the production? What is the distribution plan for the doc after Venice?

We came on-board when the material had already been shot, so all the kudos should go to producer Paula Lavigne. We started to collaborate during the editing process. Renato Terra and Ricardo Calil had directed a great musical and political documentary at VideoFilmes, “A Night in 1967,” and the editing phase was a very enjoyable experience. There were historical ties linking all of us, in many ways. As for distribution, we’re speaking with different friends and companies with which we normally collaborate in Europe and in the U.S. Globoplay has acquired the rights for streaming in Brazil.