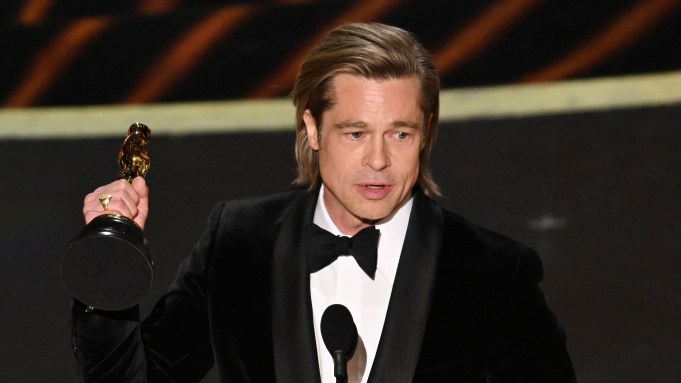 Brad Pitt continued his awards season (and acceptance speech) domination on Sunday night, winning the supporting actor Oscar for his portrayal of stuntman Cliff Booth in Quentin Tarantino’s “Once Upon a Time in Hollywood.”

During his speech, Pitt also got political, calling out the Trump impeachment trial for blocking the testimony of former national security adviser John Bolton.

“They told me I only have 45 seconds up here, which is 45 seconds more than the Senate gave John Bolton this week,” he said on stage. “I’m thinking maybe Quentin does a movie about it — in the end, the adults do the right thing.”

He went on to further pay tribute to Tarantino: “Tarantino, you are original, you are one of a kind. The film industry would be a much drier place without you.”

Backstage in the press room, Pitt was asked about his comments concerning Bolton. “I was really disappointed with this week,” he said. “I think when gamesmanship trumps doing the right thing, it’s a sad day, and I don’t think we should let it slide. I’m very serious about that.”

As for what’s next, Pitt said backstage, “I think it’s time to go disappear for a while now, and get back to making things.”

Pitt also nabbed the supporting actor prize at the Screen Actors Guild Awards, BAFTAs and Golden Globes, against a field of fellow veterans, including Tom Hanks in “A Beautiful Day in the Neighborhood,” Anthony Hopkins in “The Two Popes,” and Al Pacino and Joe Pesci in “The Irishman.”

This is the first Academy Award that Pitt has received for acting, though he previously won as a producer when “12 Years a Slave” took best picture in 2014. He was nominated for best actor for his performances in 2009 for “The Curious Case of Benjamin Button” and in 2012 for “Moneyball,” as well as supporting actor in 1996 for “12 Monkeys.”

“Once Upon a Time in Hollywood” was also up for nine other Academy Awards: best picture, directing and original screenplay for Tarantino, actor for Leonardo DiCaprio, production design, cinematography, costume design, sound mixing and sound editing.

Adam B. Vary contributed to this report.