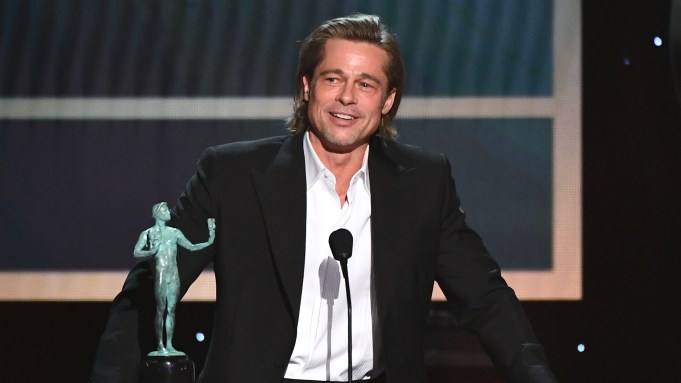 Brad Pitt referenced Quentin Tarantino’s foot fetish and his headline-making marriages in a wide-ranging speech while accepting the Screen Actors Guild Award for male actor in a supporting role.

The “Once Upon a Time in Hollywood” star set the humorous tone of his speech from the get-go. “I have to add this to my Tinder profile,” he quipped, holding up The Actor.

“Seriously, Quentin has separated more women from their shoes than the TSA,” Pitt said, leaving his co-stars in stitches.

He thanked his “Once Upon a Time” cast for “elevating” his game before getting surprisingly candid.

“I certainly hope I did the same for you. Let’s be honest; it was a difficult part. A guy who gets high, takes his shirt off and doesn’t get on with his wife. It was a big stretch,” the actor, who’s normally tight-lipped about his personal life, told the shocked crowd.

“I have been banging away at this thing for 30 years,” Pitt, who recently also won a Golden Globe for his “Once Upon a Time” role as stuntman Cliff Booth, said. “I think the simple math is some projects work, and some don’t, and there is no reason to belabor either one. Just get on to the next and keep telling stories.”

Pitt’s ex-wife Jennifer Aniston smiled on during his speech, later winning her own trophy for female actor in a drama series for “The Morning Show.”

When asked backstage to elaborate on how much of his personal life informs his work, Pitt said, “Always. I make everything personal to a fault.”