Continue to Variety SKIP AD
You will be redirected back to your article in seconds
Sep 17, 2020 8:15pm PT 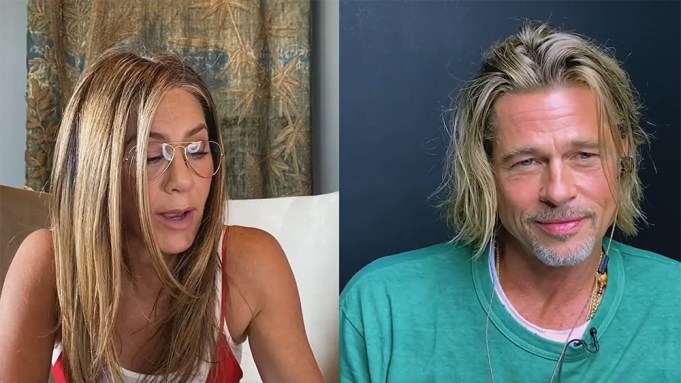 The hour-long streaming event took place on the Facebook page for Penn’s nonprofit CORE (Community Organized Relief Effort) and LiveXLive as well as criminal justice reform group Reform Alliance. Dane Cook hosted and Freeman narrated the unrehearsed read, which came off with no noticeable fumbles in a dozen key scenes from the coming-of-age dramedy.

Much of the attention paid to the starry event — originally scheduled for a month ago but delayed by “technical difficulties” — focused on Pitt and Aniston performing together, 15 years after their divorce. Pitt voiced Brad Hamilton, played by Judge Reinhold in the film, and Aniston played Phoebe Cates’ Linda Barrett character. The duo re-enacted the movie’s deeply embarrassing swimsuit sequence with Freeman ad-libbing “Lord, have mercy” at one point.

Pre-show banter featured Roberts provoking laughing from castmates by asking Legend’s spouse, Chrissy Teigen, about her orange outfit — “Is that what you wear when you’re walking around the house?” — followed by Los Angeles Mayor Eric Garcetti’s introduction, in which he called the movie the most important of his youth.

The event concluded with a brief appearance by director Amy Heckerling and screenwriter Cameron Crowe, who adapted the script from his book about going undercover at a San Diego high school. Heckerling recounted that Penn did not have to audition for the role because he made such a strong impression and that Penn forced everyone to call him “Spicoli” on the set and refused to answer to his actual name.

“He got the job on the sheer force of his Sean-ness,” she added.

Organizers announced Friday that the event had attracted 4 million viewers and raised more than $135,000 for CORE and Reform Alliance.