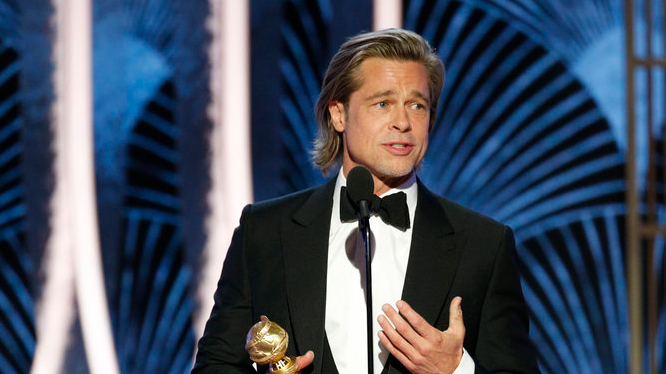 Brad Pitt won the second Golden Globe of his career on Sunday night, nabbing the best supporting actor statue for his role in Quentin Tarantino’s “Once Upon a Time in Hollywood.”

Pitt marveled at the stiff competition in his category, including Tom Hanks (“A Beautiful Day in the Neighborhood”), Anthony Hopkins (“The Two Popes”) and Al Pacino and Joe Pesci (“The Irishman”).

“Holy moly, thank you so much. Thank you to the eclectic and ever-raucous Hollywood Foreign Press Assn.,” Pitt said while accepting his honor. “When I was starting out, these names that were just listed: Pacino, Pesci, Hanks — my de facto mentor from afar. Sir Tony Hopkins, wherever you are, you know I love you. They were like gods to me. All my respect, sincerely.”

The actor was up for playing stuntman Cliff Booth in Tarantino’s ode to the Golden Age of Hollywood. Pitt plays opposite Leonardo DiCaprio’s Rick Dalton, an aging star looking for his next break. Booth, his on-set companion, stand-in, driver and stuntman, endures the star’s many needs. On stage, Pitt expressed his gratitude for the cast and crew of “Once Upon a Time in Hollywood.”

“I have to start by thanking the man himself, Mr. Quentin — the man, the myth, the legend — for this experience, for the film, one I’ll never forget. Thank you, my brother, I really appreciate it. I also have to thank my partner in crime, LDC. Before “The Revenant,” I used to watch year after year his co-stars accept awards and get up and thank him profusely. I know why he’s an all-star; he’s a gent. I wouldn’t be here without you, man. I thank you still. I would have shared the raft.”

Pitt told the crowd at the Beverly Hilton Hotel his family wasn’t in attendance because they were in the Ozarks.

“I wanted to bring my mom, but I couldn’t because any woman I stand next to, they say I’m dating. It would just be awkward,” he joked.

Pitt has previously been nominated for a Golden Globe for “Moneyball,” “The Curious Case of Benjamin Button,” “Babel” and “Legends of the Fall.” He won in 1996 for actor in a supporting role for “Twelve Monkeys.” At that time, he thanked director Terry Gilliam, his then-girlfriend Gwyneth Paltrow and the makers of the medicine kaopectate: “They’ve done a great service for their fellow man.”

Pitt closed out Sunday’s speech with a plea for kindness.

“Hey, if you see a chance to be kind to someone tomorrow, take it,” he said. “I think we need it.”