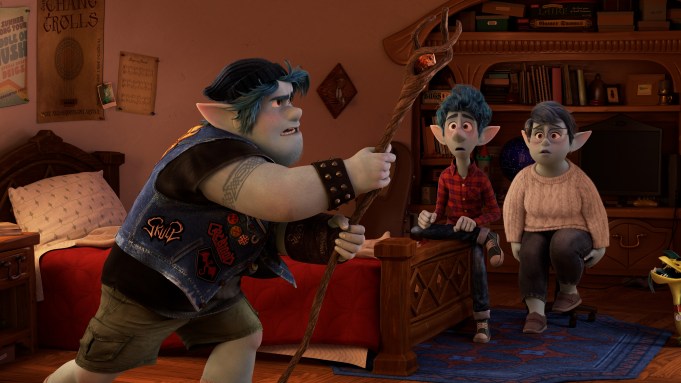 The film collected $28 million from 47 foreign markets, representing about 60% of its international footprint. However, “Onward” didn’t open in any areas being impacted by coronavirus, including China — where movie theaters are closed, as well as South Korea, Japan and Italy.

“Onward,” a fantastical adventure about two teenage elf brothers (voiced by Tom Holland and Chris Pratt) on a quest to spend one last day with their late father, launched in North America with a lackluster $40 million for a global start of $68 million. Pixar films typically cost $175 million to $200 million to make, a hefty fee that doesn’t account for global marketing.

Among new markets, “Onward” had the biggest opening in the United Kingdom with $4.4 million, followed by France with $3.3 million, Mexico with $3 million and Russia with $2.1 million. The movie’s debut was pushed until April in territories like Korea, Italy and Japan, while its release in China has yet to be determined.

In second place, Universal and Blumhouse’s “The Invisible Man” had another strong weekend, generating $17.3 million from 65 foreign territories.The terrifying thriller starring Elisabeth Moss has made $98.3 million globally to date, including $45.6 million overseas. “The Invisible Man” debuted this weekend in 18 new markets, including Russia ($1.4 million), Malaysia ($700,000), the Netherlands ($500,000) and Thailand ($200,000).

Paramount’s “Sonic the Hedgehog” placed third on international box office charts with $12 million from 62 markets. Those ticket sales boost its foreign total to a strong $154.8 million. The animated family film has amassed $140 million in North America for a global haul of $294.8 million. “Sonic” has seen the best holds in the U.K. ($23.9 million to date), along with France ($14.7 million to date) and Mexico ($17.4 million to date).

Guy Ritchie’s “The Gentleman” and Disney-20th Century’s “The Call of the Wild” rounded out the top five. “The Gentleman” brought in another $4.9 million for an international cumulative total of $74.4 million. Meanwhile “The Call of the Wild” added $4.8 million from 47 markets, boosting its tally to $42 million overseas and $99.6 million globally. The film cost $125 million and is expected to lose money for the studio.