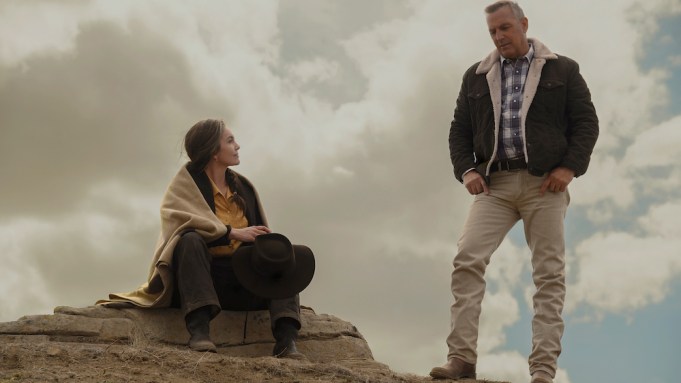 Focus Features’ “Let Him Go” provided a few sparks at an otherwise lifeless box office, opening over the weekend with an estimated $4.1 million.

In these COVID times, that was good enough for a first place finish. Focus also took second place with the sophomore weekend of its horror film “Come Play.” Co-produced with Amblin Partners, “Come Play” netted $1.7 million domestically bringing its total to $5.6 million.

The speciality division of Universal Pictures has been active during coronavirus in part because of a deal that its studio parent company inked with AMC Theatres. The pact enables Universal and Focus to release their movies in on-demand platforms within 17 days of their theatrical debuts. In return, AMC receives a cut of digital revenues.

Of course, the big story of the weekend was not cinemas. It was a presidential election that stretched from Tuesday to Saturday, dominating the news and Americans’ attention.

“Let Him Go” stars Kevin Costner as a retired sheriff and Diane Lane as his wife. The couple leave their Montana ranch to rescue their young grandson from the clutches of a dangerous family living in the Dakotas — a confrontation that ends in violence. Lesley Manville, who scored an Oscar nomination for her work in another Focus release, 2017 “Phantom Thread,” co-stars. “Let Him Go” was written and directed by Thomas Bezucha, the filmmaker behind “The Family Stone.”

“War With Grandpa,” a Robert De Niro family comedy from 101 Studios, took third place, grossing $1.5 million to bring its total after three weeks to $13.4 million. Open Road’s “Honest Thief,” a thriller with Liam Neeson, was fourth with $1.1 million, pushing its haul to $11.2 million.

Christopher Nolan’s “Tenet” rounded out the top five with $905,000 domestically. That pushed the sci-fi thriller’s stateside haul to $55.1 million. Globally, the movie has grossed $350.8 million. Given that Warner Bros., the studio behind the film, has announced that “Tenet” will launch on home entertainment in December, the movie has largely wrapped up its box office run. Given its $200 million price tag and marketing costs, “Tenet” will likely fall short of profitability.

Warner Bros. said “The Witches,” the Robert Zemeckis adaptation of the Roald Dahl novel, generated $3.5 million in overseas box office, bringing its total to $10.1 million. In the U.S., “The Witches” opted to debut on HBO Max instead of screening in theaters.

Also of note: Disney’s re-release of “Toy Story,” picked up $505,000 some 25 years after it first opened in theaters and became a family classic.

At this point, exhibitors will take what they can get in terms of ticket sales, but with box office grosses like these, it’s going to be a long, potentially deadly winter for theaters. If “Wonder Woman 1984” moves from its Christmas release, it’s unclear how theaters will be able to stay open barring some significant government assistance.