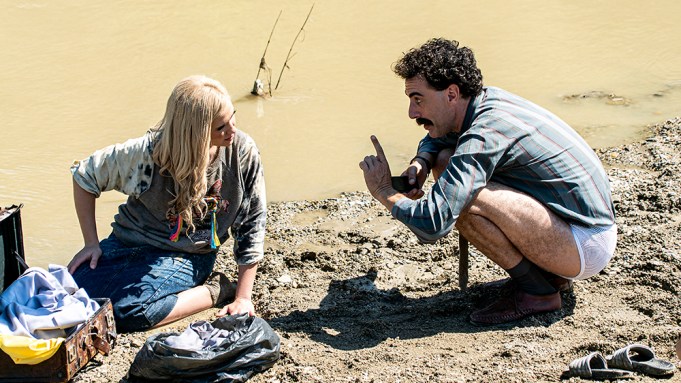 The official Twitter account for Borat, star Sacha Baron Cohen’s alter-ego in the comedy sequel, released the brand new clip, which did not make it into the film’s final cut, on Friday.

Borat claims in the video that far-right cable channel One America News took Bakalova, under the guise of a conservative journalist, into the White House.

“OAN is most rigorous news source in America. I know this because they take my daughter into the White House. No need for security checks or Covid tests. They boring!” Borat narrates over clips of OAN reporter Chanel Rion asking Trump several questions at press conferences.

Trump very careful who he let into his events and house. No Covid test necessary – High 5! pic.twitter.com/Kf5gGk3n2M

Bakalova also appears in the audience while President Trump addresses an audience with Donald Trump Jr. and Kimberly Guilfoyle on stage. Bakalova is wearing a different outfit and wig than her previous appearance with Rion.

The actor then meets Trump Jr. at a press line after the president’s address and appears to say to him, “I’m a little bit nervous, but I’m very excited to meet you,” while someone films. Trump Jr. replies, “Thank you very much. Appreciate it. Good to meet you.”

Sources tell Variety that footage for the clip was shot in September.

“Borat Subsequent Moviefilm,” released on Friday on Amazon Prime Video, has made headlines for a compromising scene with former New York City mayor Rudy Giuliani. In the film, Giuliani appears to put his hands down his pants while speaking with Bakalova, dressed in her journalist disguise, in a hotel bedroom. Giuliani has since called the video a “fabrication.”