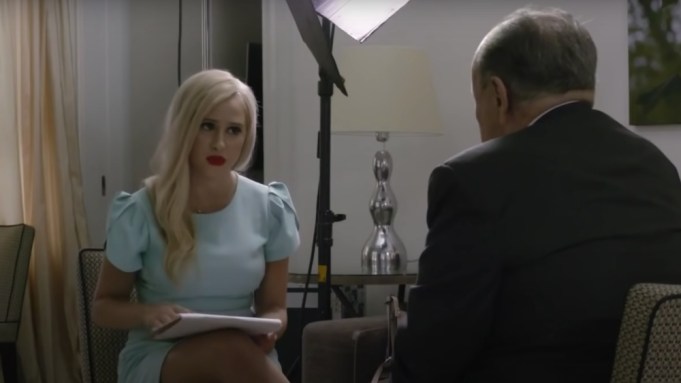 There are movie stars who make a memorable entrance the first time you see them. For Maria Bakalova, it all began with her sitting in a barn, covered in dirt, in “Borat: Subsequent Moviefilm.”

Bakalova’s story has mostly remained a mystery since the film premiered, but recently it has started to emerge. On Tuesday, it was announced she had signed with CAA. On Wednesday, there was a profile in the New York Times. And now, Variety presents a special bonus edition of its Awards Circuit podcast with the up-and-coming actor. Listen below!

Since the sequel to Sacha Baron Cohen’s 2006 smash hit dropped October 23, the world has been taken by the actor playing Borat’s 15-year-old daughter, Tutar. Talk of a best supporting actress nomination started immediately and Bakalova watched her IMDb StarMeter rocket to the top.

Starting off sheltered and miseducated in a society that believes women are objects (and their vaginas have teeth), Tutar has the true hero’s journey of the film, transforming physically and mentally to a strong, independent woman. While the film is outrageously funny — largely due to the setups in which unsuspecting bystanders witness the raucous behavior of the pair — Bakalova never plays for the laughs or winks at the camera, delivering a completely committed and three-dimensional performance. Her Tutar is a flesh and blood character both audiences and Borat come to love and value – a true feminist icon for the screen.

The Bulgarian Bakalova had a few credits to her name when she heard about a mysterious audition for a “big Hollywood movie.” She did a self-tape and was asked to come in for an audition, but admits she was suspicious. “I called my manager and he was like, ‘I promise you, they won’t kidnap you, they won’t sell your organs and they won’t kill you,” Bakalova recalls.

The audition process was lengthy and extremely secretive – she says her own parents didn’t know what the movie was about until they saw the trailer. But Bakalova clicked with Cohen early on. At an early work session, she remembers thinking that even if the movie didn’t work out, she hoped she could see him again someday. “I honestly can say that … I love him as my other parent. I trust him, he believed in me and we created this project that is like our baby – but not in a weird way,” she laughs.

That love and trust went a long way when the two were filming some of the more outrageous scenes, but Bakalova says she never felt she was in jeopardy. During the now-famous scene with Rudy Giuliani she notes there was a moment of concern because he was calling the cops – but even if they went to jail, “we would be together” and she was safe.

Listen to the whole interview with Bakalova, including how she’s handling the whirlwind of the last few weeks and what the future has in store, on a bonus edition of Variety’s Awards Circuit Podcast.

Variety’s “Awards Circuit” podcast, hosted by Clayton Davis, Jenelle Riley, Jazz Tangcay and Michael Schneider (who produces), is your one-stop listen for lively conversations about the best in film and television. Each week “Awards Circuit” features interviews with top film and TV talent and creatives; discussions and debates about awards races and industry headlines; and much, much more. Subscribe via Apple Podcasts, Stitcher, Spotify or anywhere you download podcasts. New episodes post every Thursday.