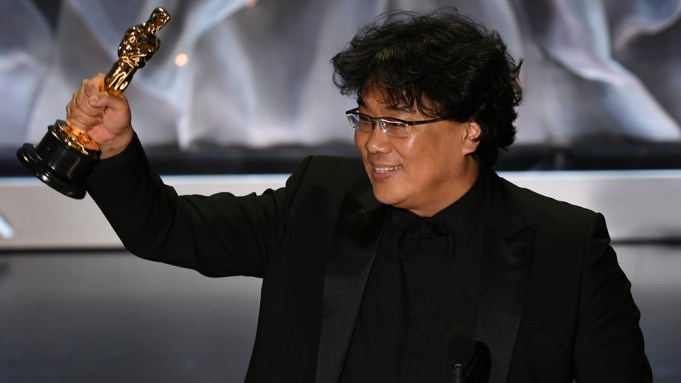 It’s the latest awards glass ceiling “Parasite,” a twisty thriller about a poor family infiltrating a wealthy household, has broken. Earlier in the evening, it became the first South Korean film to win any Oscar at all when it took original screenplay for Bong and co-writer Han Jin Won. It would go on to also win best international film, becoming the first South Korean film to take that prize (it was already the first Korean movie to be nominated in the category).

During his speech, Bong paid touching tribute to each of his fellow nominees, expressing a desire to somehow split his trophy into five pieces to share it with all the filmmakers.

“When I was young and studying cinema, there was a saying that I carved deep into my heart, which is, ‘The most personal is the most creative,'” an emotional Bong said on stage. “That quote is from our great Martin Scorsese. When I was in school, I studied Martin Scorsese’s films. Just to be nominated was a huge honor.”

“When people in the U.S. were not familiar with my films, Quentin [Tarantino] always put my films on his list,” he went on. “He’s here, thank you so much.”

“And Todd [Phillips] and Sam [Mendes], great directors that I admire,” he concluded. “If the Academy allows, I would like to get a Texas chainsaw, split the Oscar trophy into five and share it with all of you.”

“Parasite” could mark another major milestone later in the evening; should it win best picture, for which it’s nominated, it will be the first foreign-language film to take the Oscars’ biggest prize.