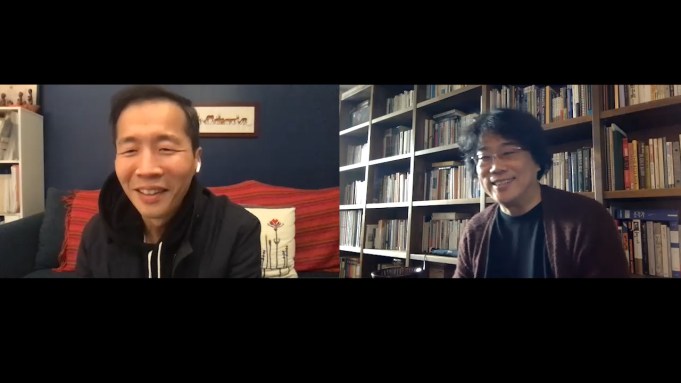 This year, Bong Joon Ho made history and won four Academy Awards with his film “Parasite,” detailing a down-on-their-luck Korean family ingratiating themselves into the lives of a wealthy household. Lee Isaac Chung’s “Minari” describes a different family; based on Chung’s childhood experiences, the film casts Steven Yeun and Yeri Han as Korean immigrants in the 1980s who move to Arkansas to start a new life as farmers. Alan Kim plays their son, David, who balks when his grandmother (a scene-stealing Yuh-jung Youn) comes to live with them.

The two filmmakers discussed creating on-screen families, telling personal stories and their work with Yeun as a part of Variety’s inaugural FYC Fest.

Bong Joon Ho: I’m curious if everyone in your family all watched the film. Your mother, father …

Lee Isaac Chung: Yeah, they all watched it. My mom and dad, they saw it last year in November. Around Thanksgiving time, actually.

Bong: It must have been a big gift to the family.

Chung: At the time I thought I was going to ruin the Thanksgiving dinner. I was so scared. I was more scared about that than our premiere, to be honest. But they really loved the movie, and it was an incredible time for us as a family.

Bong: I think it takes a lot of courage to shoot a film about yourself or your family, since it’s autobiographical. But what I appreciated more about this film is that it doesn’t wallow in nostalgia. It follows the perspective of multiple characters, and it doesn’t feature any voiceovers or narration. I think that level of distance makes the film more beautiful and universal. I wonder if that’s something you intentionally worked on to create, or it just happened naturally in your screenwriting process.

Chung: There was a time with this that I thought maybe I would do like … a bookend of voiceover. But as I was writing the film, I realized more and more: I was able to create distance with this story by not only thinking of myself as David, as the little boy. I thought of myself as Jacob, Steven’s character, quite a lot. And then I also felt very close to all the other characters. I wanted that distance to be there for sure, because I didn’t think it would work as just a memory piece only, but it needed to be like a family story. So there was an intentional choice to do it a little differently.

Bong: You were essentially casting your parents with Steven Yeun and Yeri Han, and that could have been a tricky process as a director. I’m curious what approach you took during casting.

Chung: You’ve worked with [Yeun] before, and I’m just curious about your experiences working with him and what that was like. He’s kind of a singular person in America, and [I’m] just curious — like your experience on “Okja.” I love what he does in that film and his whole character. And he kind of has that lovable aspect in unity. I feel that he could do something very bad in bringing his family to this farm in Arkansas, but still you love him.

Bong: In “Okja” he’s a man who lies, but you can’t really hate him for doing so, and you actually come to adore him. Steven has this lovable quality to him. But his performance in “Minari” was on another level. You see the heavy burden on this young father’s shoulders and his obsession over this farm. You really get to see a new side of Steven — a truly father-like father.

Chung: He has this quality to him that you want to love him.

Bong: You said that you tried thinking about how your parents felt and viewed the story from Steven’s perspective. At the time you were probably too young to understand what was going on. But during the screenwriting and shooting process, now that you’re an adult, were you trying to understand what they were going through? The things you couldn’t understand back then?

Chung: My daughter is now 7 years old. And just as Jacob is trying to farm and to chase this dream, I felt like for many years I’ve been irresponsibly chasing a dream of filmmaking. So something within understanding my dad’s pursuit and then also the conflicts that can come from that. And then also understanding the perspective of what it’s like for my daughter to be watching what I’m doing and my wife’s concerns and all these things. I felt it was helping me to see my parents in a different way. Then when my parents saw [the film], to see that they felt I had seen them. The way that they responded was “You understand us; you see us.” And to me, that was incredibly moving.