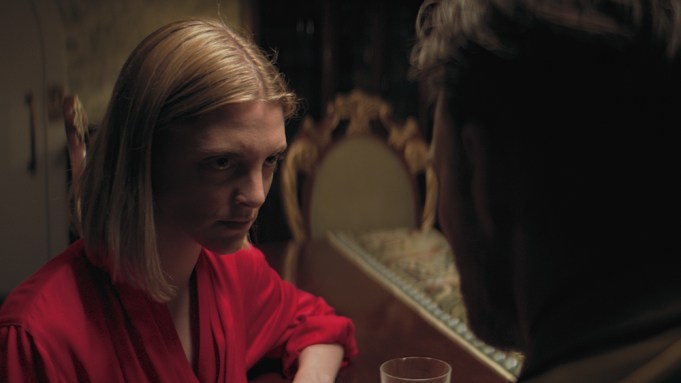 Things get gruesome in Amelia Moses’ werewolf thriller “Bloodthirsty.” The upcoming film follows a rising singer and songwriter named Grey (Lauren Beatty), who goes to work on her second album with noted music producer Vaughn Daniels (Greg Bryk) at his remote cabin in the woods.

But as the music making progresses, she begins a gruesome transformation into a powerful beast with a yearning for blood.

In an exclusive clip of “Bloodthirsty,” Daniels invites her to have dinner with him alone. He continues to push her boundaries, offering her a drink of absinthe despite her reluctance, which leads to an unexpected reaction.

Moses directed the movie from a script written by Wendy Hill-Tout and her daughter, songwriter Lowell. The duo wanted to collaborate on a script, Hill-Tout said, and they came up with the concept that later became the story for “Bloodthirsty.”

“I loved writing it because I love characters in conflict, and what could be better than a vegan who can’t kill an animal starting to change into a werewolf against her will? For me, it’s a female empowerment story, a fantasy story, and I love that as she becomes more powerful and dangerous, her art becomes more powerful,” Hill-Tout said. “It asks what we ultimately have to do to create great art.”

The script was also inspired by the pressure Lowell found when trying to write a follow-up album to her first record, “We Loved Her Dearly.”

“The pressure of creating a follow up that would both measure up critically and be significantly more mainstream, I soon realized, was a maddening feat,” Lowell said. “My writers block was a literal monster trying to destroy me. That’s when Wendy and I started writing.”

Through screenwriting, Lowell says she explored the process of creating true art in asking questions like: “How far you are willing to go for the sake of art? How deep are you willing to reach within yourself, and when you do, what or who will you find? Will it free you or will it inevitably consume you?”

“I knew the music needed to feel both nostalgic and contemporary at the same time so I did my best to capture the chords and essence of 90s grunge while still maintaining the lyrical intimacy in music currently trending today,” she said.

“Bloodthirsty” is the closing night film of this year’s Fantastic Fest. The genre festival — spotlighting thriller, fantasy, sci-fi and action movies — runs from Sept. 24 through Oct. 1.

Watch the clip of “Bloodthirsty” above.