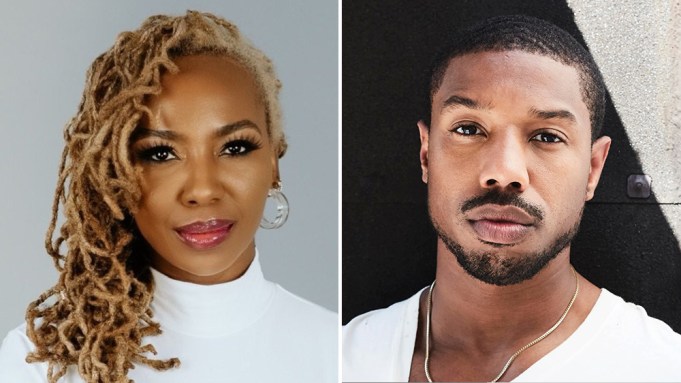 “I had actually just watched the film ‘Fruitvale Station,’ when I first heard that George Zimmerman was being acquitted of the murder of Trayvon Martin,” Tometi tells Variety, recalling the birth of the movement. “Between watching the film and sitting in that moment with the reality that these types of tragedies are still happening, I was moved to action.”

“I quite literally went home that night, cried my eyes out, and the next morning called Alicia Garza [fellow co-founder of Black Lives Matter, along with Patrisse Cullors] and created our Facebook page, bought our domain, and started building out our social media platforms in order for us to start mobilizing more people,” she says. “So, for me, [that] film has been central to my own activism in that way.”

Today, Tometi serves as a co-ambassador for the Social Justice Now Film Festival alongside “Fruitvale Station” star Michael B. Jordan. The 2013 film, which saw Jordan embody the late Oscar Grant III, a 22-year-old who was fatally shot by BART police in 2009, and “Just Mercy” will open the film festival with drive-in screenings on Wednesday, Oct. 21, at Paramount’s Drive-In Theater, sponsored by Amazon Studios.

“As I look at the trajectory of the movement, and I look at the trajectory of myself as a human rights leader, but also as a person who’s really invested in the production of our stories and of the telling of our stories, it’s powerful to me to be standing alongside him,” Tometi says of representing the film festival with Jordan. “I think it’s just an important opportunity to share the story of how powerful and impactful storytelling truly can be. It can quite literally change the course of history.”

And as Hollywood has pledged to use its influence to help in the fight against racial injustice, industry insiders Jeff and Nicole Friday worked to figure out how they could help promote social change through storytelling. So, through their Film Life Foundation nonprofit, the Fridays decided to launch a new film festival.

“After George Floyd and Breonna Taylor, we knew we had to make an impact and the only way we knew how to was use our platform to make change,” the Fridays tell Variety via email. “We wanted to continue the dialogue in our country around issues that impact Black and Brown communities as well as push the message of voting leading up to the election. The Social Justice Now Film Festival is our way of protesting and amplifying the voices of the marginalized and creating real lasting social and political change.”

The inaugural film festival, which runs Oct. 21-25, is also testament to innovation, after the Fridays successfully pivoted the American Black Film Festival to a virtual model earlier this year. But, after announcing the Social Justice Now event in August, the real test began: “The primary challenge in producing this festival was the time to plan everything.”

In addition to screening Jordan’s film, the program for the virtual film fest includes conversations and filmmaker talk backs featuring prominent Hollywood figures, civil rights activists and political figures (one example, in an on-demand conversation, actor and producer Nnamdi Asomugha will lead a conversation with “Caste: The Origins of Our Discontent” author Isabel Wilkerson, with a special appearance by Kerry Washington). More than 400 films were submitted for consideration and a jury of entertainment executives and representatives from social organizations narrowed the selections down to 40 narrative films, shorts, documentaries and new media projects.

“What makes this festival unique is our focus on collaborative programming,” they said. “More than 10 organizations have come together to plan the festival including our coalition partners [Endeavor Content, One Community and Outlier Society], several impact partners, and our founding sponsor, Sony Pictures Entertainment.”

“Michael and Opal have been very supportive, and through their own work in film and the Black Lives Matter [movement], have been advocates and activists for the social justice movement,” the Fridays add. “So partnering with them really made sense for us to align ourselves with two people who have been vested in this space for years and believe in change.”

Speaking of the Fridays and their work, Tometi says, “I admire what they’ve done for Black film and for being a space where a lot of filmmakers got their break. It’s great to see them really expand their own their brand, their own platform to say ‘No, we’re going to actually take a really unapologetic stance and stand for social justice.’ We’re going to curate a film festival that allows for more people to engage with this type of storytelling.”

Explaining why she thinks filmmaking and social justice activism go hand in hand, Tometi says, “I think the medium is so immersive — film transports you literally to another time, another place, another person’s perspective. And it to me, is probably the most powerful tool for empathy, and really developing and cultivating that in other people, and in ourselves as storytellers.”

See the full festival lineup below:

Renowned journalist Soledad O’Brien, and The SpringHill Company’s COO, Devin Johnson, talk candidly with Sekou Kaalund, Head of Chase Consumer Banking, Northeast Division. , about the importance of entrepreneurship when it comes to economically leveling the playing field in the realm of social justice and equality. They discuss the autonomy and empowerment of building wealth on one’s own terms, as well as share insights and lessons learned from their respective business journeys.

“The Origins of Our Discontents”
Always Available

Pulitzer prize-winning author Isabel Wilkerson discusses her new book CASTE: The Origins of Our Discontents, which examines the unspoken caste system that has shaped America and shows how our lives today are still defined by a hierarchy of human divisions. Interviewed by actor/producer and former NFL player Nnamdi Asomugha, with special appearance by Kerry Washington.

Ben Crump has dedicated his career, as a trial attorney, to fighting for civil rights and justice. Join him, in conversation with Laura Coates to hear about his path, and what happens when life brings you the unexpected and unthinkable.

Fifty-one years after Rep. Shirley Chisholm (D-NY) became the first Black woman elected to Congress, a record-breaking number of Black women are running for political office including Kamala Harris’ history making run to be the first woman Vice President. Black women are shaping and building political power for themselves and their communities. In this panel, we will explore the role of Black women’s voices – and their votes – on the final push to Election Day 2020.

Black LGBTQ individuals face multiple intersectional structural adversities relating to their sexual orientation, gender and racial identities. This election is especially important to the LGBTQ community as it fights to uphold that Black Lives Matter but to also ensure that the gains that they have made in the LGBTQ community are not turned back.

Ending mass incarceration has been called the civil rights issue of our time. Through the experience of formerly incarcerated, this panel will explore how to create a system that respects human dignity and avoid recidivism by removing barriers to opportunity.

“War on Voting: Voter Suppression Past and Present: Rights Restoration and How We Fight Back”

Not long ago, there were poll taxes and literacy tests, while sheriffs stood outside of polling places preventing Black people from voting. Volunteers who registered Black people to vote were persecuted and even killed. The remnants of these practices remain today, but better disguised. Rather than wielding weapons or physically blocking people from voting, state, local, and federal governments are enacting policies and practices to curtail the growing political power of voters of color as they emerge into the new American majority. Leaders in the fight for voting rights from Advancement Project National Office, New Georgia Project, New Florida Majority, and Florida Rights Restoration Coalition will discuss the past and present forms of voter suppression, and what we can do to eliminate these wrongs once and for all.

One of the powers of storytelling is its ability to ignite public consciousness, and when it comes to social justice – it serves as a critical tool to spotlight systemic issues, analyze often tragic moments in history, and share real-life stories that might otherwise remain largely unknown. This conversation will explore the making of content that seeks to educate and inspire change.

In an era where power truly resides in numbers (and voices), active allyship continues to be the differentiating variable to eradicating systems that seek to oppress and suppress the world’s most marginal and vulnerable communities. Much of the progress gained in the U.S. through countless civil rights battles were brought via applied intersectional pressure, where marginalized peoples across sub-demographic lines joined forces to push back against the larger institutionalized system that, by design, seeks to keep them separate. As movements ebb and flow, the tide begins to rise when marginalized people alike recognize that they truly have the most in common in their collective fight for equitable incorporation and agency. The traumatizing events of 2020 demonstrated both the power and necessity of converting multicultural allies into accomplices, where the passive Ally of yesteryear takes on new form as an Accomplice for justice in the ongoing battle for equal rights and protection under the law.

Sunday, October 25
“Us Kids,” with director Kim A. Snyder