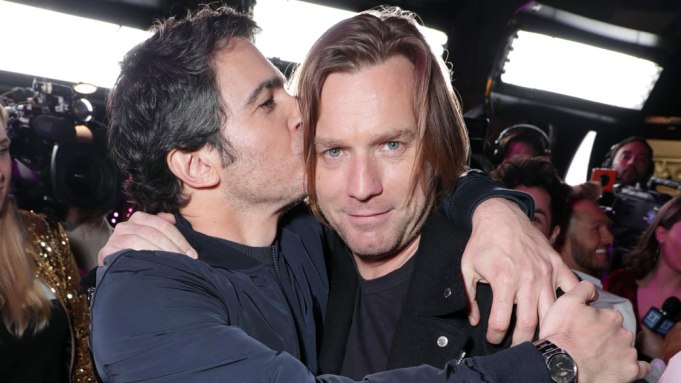 Rosie Perez isn’t the only actor playing a gay character in “Birds of Prey.”

At Thursday night’s opening of the “Birds of Prey” Harlywood exhibit in Hollywood, Variety asked co-stars Ewan McGregor and Chris Messina if the internet chatter surrounding the sexuality of their characters — villains Roman Sionis (aka Black Mask) and Victor Zsasz — is true. Are they gay?

“It’s very complicated,” McGregor said. “Their relationship is very much based…there’s a want and a need in there for sure.”

Messina added, “There’s like a real love of anarchy.”

McGregor then interjected and said, “More than likely, yes.” Both actors laughed.

Before the interview began, Messina planted a kiss on McGregor’s cheek.

Meanwhile, McGregor and Messina said they can’t wait for people to finally see the film. “It was incredibly bonkers to shoot,” McGregor said. “Every take was like a new experience.”

Set for release on Feb. 7, “Birds of Prey” is also one of a growing number of superhero movies to deliberately push for an R rating.

“I think you can’t do a Harley movie and not make it rated R,” Messina added.

Harleywood, located at the Hollywood & Highland complex, is a three-day activation featuring an exhibit of costumes and props from the movie. The Thursday night event included a laser light show as well as fireworks.