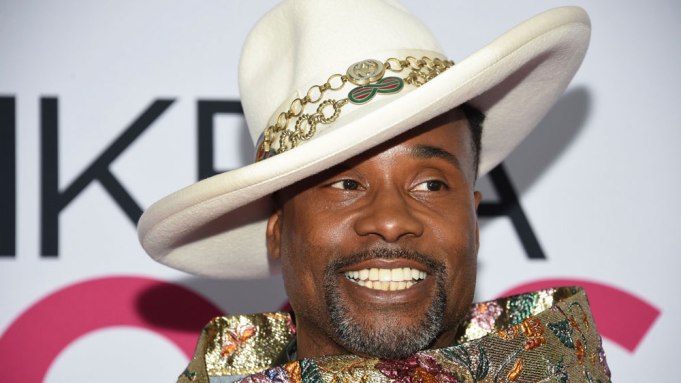 Get ready for a Fairy Godmother like no other.

Billy Porter plays the iconic character in the upcoming “Cinderella” remake. He describes his take on the Fairy Godmother as “genderless” and “non-conforming.”

“Magic is genderless,” Porter said during on an appearance on “Variety Live” on Tuesday night. “We have all these sort of genders that we’ve put on things and it doesn’t actually matter. It’s not about sex. It’s not about sexuality. It’s not about gender. It’s about magic. It’s about being somebody’s fairy godmother, father, person, whatever you want to call it. That’s what it’s about.”

The “Pose” star had already completed his work on the movie before production was shut down in the wake of the coronavirus pandemic. He was tightlipped about what song he’s singing in the film, but he did tease his costume. “It’s gold and there are pants, there are skirts, there are heels, there are cowl necks and wands and things,” he said.

Porter is also set to voice Audrey II, the talking man-eating plant in director Greg Berlanti’s big-screen remake of “Little Shop of Horrors.” Porter couldn’t officially confirm that Scarlett Johansson has signed on to star as Audrey or that Chris Evans is set to play her abusive dentist boyfriend, but we did ask why he thinks the two would be right for those parts.

“She’s a fantastic actress and her energy is right,” he said of Johansson. “You need that kind of strong but vulnerable. It’s the dichotomy of that.”

As for Evans, he said, “He’ll be hot, which is sort of what it needs to be. You need to understand why she stays in that abusive relationship.”

Despite all his successes, Porter, who has a Tony, Grammy and Emmy on his shelf, says he doesn’t take one day for granted. He recalled being sent to a psychologist when he was five years old. “Every Wednesday after school because I was a sissy and I needed to be fixed,” Porter said.

While he tried to “butch it up” earlier in his career, Porter says that eventually stopped working.

“When you’re an artist and you’re presenting yourself, people can smell a rat. You can smell inauthenticity when we’re not authentic. You can smell it,” he said. “And I just think now I’m having this moment where the success happened because I chose myself. The success happened like this because I finally said, ‘I’m done. And if that means I don’t ever do anything again, I’m fine.’ But I’m done doing it like that. That’s no use for me. So it was taking myself out of the masculinity narrative and just being.”

Porter and his husband Adam Smith are living on Long Island during quarantine. The actor is working on his memoir, a children’s book and numerous scripts. He’ll also take part in an LGBTQ fundraiser for Joe Biden on Thursday night.

However, he won’t be singing during the virtual event. Instead look for new music from Porter on Friday, with the release of his new single, a cover of Buffalo Springfield’s 1967 protest song “For What It’s Worth.”

“Protest music was a big deal and I’m trying to bring that back because I got some s— to say,” he said. “I’m sick of it. And this is how I do it, through my art. I’m not a lawyer. I’m not a doctor. I’m not a community organizer. I’m not a politician. I’m an artist. So through my art is how I communicate. And I hope that this song is a call to action. I hope that it inspires people to get out and vote, and make sure that everybody who they know and who they come in contact with gets out and votes, because when Democrats actually come out and vote, we always win.”

You can watch the full “Variety Live” interview with Porter above.