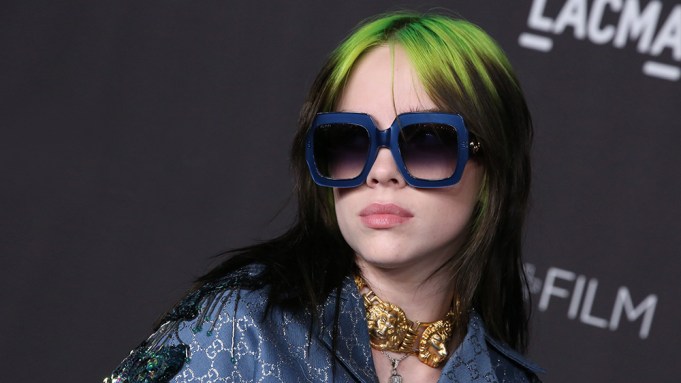 UPDATED: Billie Eilish has confirmed that she will be performing the theme song from the upcoming James Bond film, “No Time to Die.” The song was written by Eilish with her brother and musical collaborator Finneas; the film comes out in April.

In a statement, Eilish said, “It feels crazy to be a part of this in every way. To be able to score the theme song to a film that is part of such a legendary series is a huge honor. James Bond is the coolest film franchise ever to exist. I’m still in shock”.  Finneas added, “Writing the theme song for a Bond film is something we’ve been dreaming about doing our entire lives. There is no more iconic pairing of music and cinema than the likes of Goldfinger and Live And Let Die. We feel so so lucky to play a small role in such a legendary franchise, long live 007.”

Film producers Michael G. Wilson and Barbara Broccoli said, “We are excited to announce that Billie and Finneas have written an incredibly powerful and moving song for ‘No Time to Die,’ which has been impeccably crafted to work within the emotional story of the film.”

The announcement culminated an elaborate media campaign that teased the collaboration over the past two days. The rumors began on Sunday when an article posted on the James Bond fan site MI6 said simply, “Exclusive: MI6 understands that American singer-songwriter Billie Eilish will be performing the title song to the 25th James Bond film ‘No Time To Die.'” and then elaborated on the fact that she would be the youngest singer ever to do so, before explaining to its readers who the 18-year-old singer, who is up for six Grammy Awards and was named Variety’s 2019 Hitmaker of the Year, is.

Then, in the wee hours of Tuesday, Eilish posted a series of photos of actresses who have appeared in Bond films — including Eva Green, Halle Berry and Lea Seydoux — on her Instagram story.

Reps for Eilish and MGM did not respond to Variety’s repeated requests for comment. Eilish’s social-media accounts have been a key element in media campaigns in recent days: Late last Tuesday night, she announced on Twitter that she will be performing on the Grammy Awards and tagged the Recording Academy, which gave the post authenticity, although the news was not confirmed until the Academy issued a press release several hours later; Ariana Grande did the same thing over the weekend.

The choice of Eilish represents a dramatic change of direction for the legendary franchise’s long history of theme-song performers, which have progressed from Shirley Bassey to Paul McCartney and Duran Duran over the decades. More recent films have featured younger artists like Adele — who sang the smash hit “Skyfall” — and Sam Smith, both of whom, while contemporary artists in their 20s, are both British and create more adult-leaning music than Eilish: Her music is innovative and enormously popular, but her audience skews much younger than those artists’.

Having said that, her lyrics are often dark and spooky, and the Bond film’s title, “No Time to Die,” isn’t worlds away from Eilish song titles like “Bury a Friend” or “Six Feet Under.”

“No Time to Die” is scheduled to be released in April.

CONFIRMED: @HansZimmer will compose the score for #NoTimeToDie. Director Cary Joji Fukunaga said: “I’m beyond excited that Hans is scoring #NoTimeToDie. The music of Bond has always been iconic and I’ve already witnessed Hans adding his touch of genius to the Bond legacy.” pic.twitter.com/L3q06ymLyH