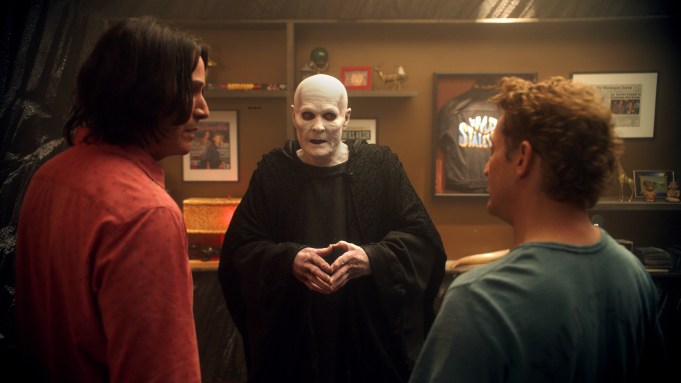 Dudes, the wait is over. ‘Bill & Ted Face the Music’ has dropped its most excellent trailer.

The time-traveling best friends — portrayed by Keanu Reeves and Alex Winter — reunite in the third installment of the franchise, set 29 years after “Bill & Ted’s Bogus Journey.”

The film, from Orion Pictures, also plans to keep its Aug. 21 release date, despite the coronavirus pandemic’s toll on exhibition. Movie theaters around the country have been shuttered since the middle of March due to the global health crisis. Cinemas in some states have been granted permission to reopen, but very few have been able to successfully set up business again.

Whoa. The wait is finally over, dudes! Keanu Reeves and @Winter star in the first official trailer for Bill & Ted Face the Music! Watch now! And remember: be excellent to each other. 🎸⚡ #BillAndTed3 #FaceTheMusic #BillAndTedDay pic.twitter.com/oh7Oj3mVK3

In the new trailer for “Bill & Ted Face the Music,” Reeves and Winter reprise their roles as the now middle-aged best friends. When a visitor from the future warns the duo that only their song can save all of humanity, Bill and Ted must travel to the future to retrieve the song — from themselves. Along the way, they will be helped by their daughters, new historical figures and various music legends.

Dean Parisot (“Galaxy Quest”) serves as director, while Chris Matheson and Ed Solomon, screenwriters from “Bill & Ted’s Excellent Adventure” and “Bogus Journey,” wrote the script. A third “Bill & Ted” film had been in the works since 2010 and was officially greenlit in 2018.

“Bill & Ted’s Excellent Adventure,” the first installment in the sci-fi comedy franchise, became a box office hit when it debuted in 1989. Due to its commercial success, a sequel — “Bill & Ted’s Bogus Journey” — arrived in 1991. Both films became cult classics.