Justin Simien, Kelly Rowland and the Cast of ‘Bad Hair’ on the Realities of Black Hair in Hollywood 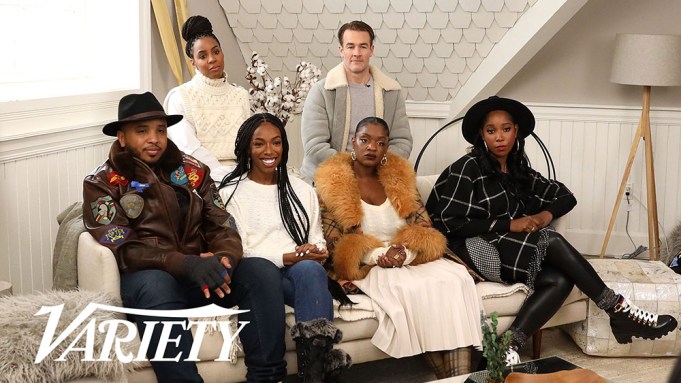 “Bad Hair” writer and director Justin Simien always intended for his horror-satire film to spark a conversation about the way society relates to appearance (especially around and among black women), but filming the project has equally affected his cast, who shared their own struggles to gain acceptance professionally and learn how to accept themselves personally.

“Just last week, last Sunday — I’m not even joking… It was the first time I wore my natural hair out. I actually, like, enjoyed my ringlets,” Kelly Rowland revealed during a conversation about the film at Variety’s Sundance studio.

Giving some added props to another star who inspired the move, Rowland explained, “[It was] thanks to, actually, Tracee Ellis Ross. She had this really great product [Ross’ natural hair care line, Pattern] and I tried it and I loved it. And it really set my hair up all pretty. And I was like, ‘I’m going to go outside like this today… This just feels really cute.’”

Rowland also revealed that rocking her natural curls led to a touching moment with her 5-year-old son, Titan.

“I come downstairs and my son’s like, ‘Mommy, I really love your hair.’ And I said, ‘Thank you baby.’ And it was just interesting… because I think it was his first time seeing me receive like, you know, my natural hair.”

In “Bad Hair,” Rowland plays Sandra, a pop star who is the inspiration for a young woman named Anna (Elle Lorraine) to get a sew-in weave in order to achieve her career dreams, including becoming a VJ at a cultural network. After Anna gets the new hairstyle, her life does change, but it all comes with a price. The character of Sandra was inspired by Janet Jackson, who sparked a cultural movement when she first began wearing a weave in 1989 (the year in which the film is set). Rowland remembers the look — and its impact — well.

“It’s beautiful and it looks effortless and that’s what we wanted… It made it look easy,” she recalled. “And I think that for so long we were told as black women, ‘Well, I don’t know what to do with that,’ or ‘This is hard.’ It’s always a scrunched face or a complaint when it comes to taking care of our natural hair and this was a new easy solution.”

“I didn’t really want to moralize getting a weave or not,” Simien explained. He instead wanted to question “the system that marginalizes and oppresses black women.” Simien added that he was inspired to make the film a horror satire after watching a Japanese and Korean subgenre of films considered “hair horror.” “I wanted to make us something about the system that sort of gives people just one or two choices in order to move ahead. I wanted to take that system to task and I just, I thought it’d be a really fun way to do that.”

The ongoing conversation about black hair has grown louder in recent years, with celebrities speaking up about their experiences in the hair and make-up chair. “We all confronted our own demons and our own, um, painful memories of going through these things,” Lorraine said of filming the movie.

“Whether it’s washing my hair in the bathtub, getting a relaxer at a very young age, [or] having a sew-in; I have a sew-in now,” Ashley Blaine Featherson (who plays Rosalyn) noted. “And it’s interesting, it juxtaposes to the film because I have a sew-in as a form of protection for my natural hair, in an industry where I’m constantly getting my hair done and no one knows how to protect my own hair.”

“I think that’s something that a lot of people might not know about black women and what we’re dealing with in the industry,” she continued. “I’ve also walked into rooms where I felt like maybe people didn’t see me, maybe saw me less because of my natural hair.”

“I almost lost a job because the hairstylist told the director, like, ‘I can’t do anything with that,’” Yaani King Mondschein (who plays Sista Soul) shared, recalling what it was like trying to book work in the industry with locked hair. “This film spoke so deeply to that choice [to cut off her locs]. And it took me before I locked my hair, it took me a year to decide to do it because I was weighing, ‘I’m an actor… is this something I want to do? I’m going to limit myself for roles. Do I care?’”

James Van Der Beek — who plays a TV executive who holds the keys to Anna’s future as a TV host — shared a story he recently heard of racial discrimination on set that opened his eyes to the issue from an outsider’s perspective.

“One of my best friends… took a job on a TV show in an undisclosed location and was told by the hair woman immediately, ‘You’re not going to last on the show cause I don’t know what to do with this [referencing the actor’s hair].’ And then tried to get her fired,” he recounted. “This is in the last six months.”

“And then she talked to somebody else of color on the show and the guy said, ‘I drive an hour and a half to get my hair done every two weeks. It’s just what you have to do,’” he continued. “And I was horrified listening to that. So, you know, [‘Bad Hair’] is a period piece, but this is still a thing.”

Of the conversation the team hopes to continue with the film, Lorraine hopes audiences ask, “At what costs do we sacrifice ourselves? At what costs do we force the people around us to sacrifice themselves and fit into a box and conform into something we see everyday? If we were to all just become one version of the same thing, we wouldn’t find brilliance like Justin, we wouldn’t have had Destiny’s Child and when we give each other the opportunities to shine and to be individuals, then we come up and we create brilliance.”