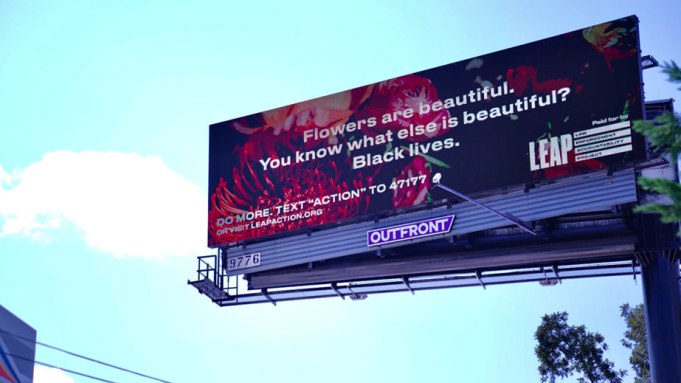 Ava DuVernay’s ARRAY Alliance stepped outside the box to unveil the next phase of its Law Enforcement Accountability Project (LEAP).

This week, LEAP debuted call-to-action messages on billboards, kiosks and atop taxicabs in South Los Angeles, Atlanta and New York City. The messaging on the outdoor media campaign, titled “Flowers,” reads: “Flowers are beautiful. You know what else is beautiful? Black lives,” with a directive to send a text message for more information about the organization.

“The time is now to galvanize citizens of all kinds and cultures around the damage done to Black people as a direct result of police violence and abuse,” DuVernay said in a statement about the ads. “With the LEAP out-of-home media campaign, we are declaring the launch of this two-year arts initiative to disrupt the narrative around police misconduct and murder.”

ARRAY’s director of programming Mercedes Cooper explained the strategy behind taking the message into a physical space.

“Our intention with LEAP’s outdoor media campaign is to infiltrate spaces in communities across the country to ignite awareness about the value of Black lives and the importance of police accountability,” Cooper said in a statement. “With the call to action messaging, we encourage everyone to think more deeply about the perpetrators of police brutality.”

By posting a message about social change on a billboard, ARRAY and LEAP have the opportunity to change the narrative of what advertisements can be, making an effort to give Black and Brown communities more substantive messages that are targeted towards the problems that affect them on a daily basis versus ads for products. By putting the message in public spaces, the LEAP team is also able to reach an audience that isn’t already aware of the project or following ARRAY on social media. The team expects to expand to more cities and potentially utilize other platforms, like newspapers or bus shelters, to get the message out.

The new billboards and Halo placements are just the latest step in DuVernay and ARRAY Alliance’s efforts to promote social change. Announced in June of this year, LEAP is a two-year project aimed to educate the public on police officers who have killed Black people, through a minimum of 20 commissioned artistic works across multiple disciplines. The Ford Foundation is the inaugural funder of LEAP and data for the project comes from the analytics organization Mapping Police Violence.

For more information about LEAP and the campaign, go to LEAPAction.org.