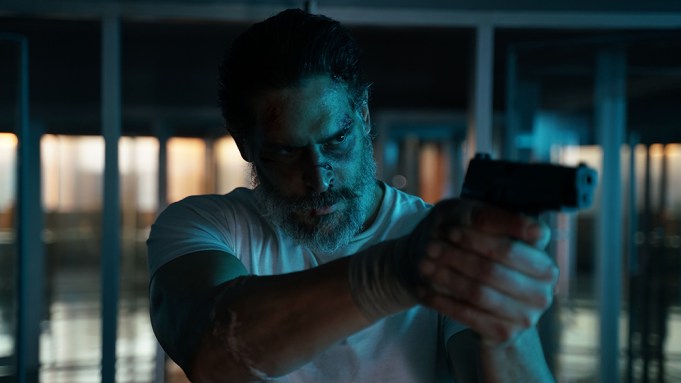 In his new indie film “Archenemy,” Joe Manganiello steps into the shoes of a man who claims he was a superhero — but his character, Max Fist, isn’t the sort of guy who’d make Superman proud.

Instead, he’s an alcoholic, drug-addicted homeless man who claims he’s been stripped of his powers after being hurdled through time and space by his titular archenemy, Cleo (Amy Seimetz). It’s a full deconstruction of the superhero genre, complete with a plucky kid reporter (Skylan Brooks) — except, in a modern twist, he’s instead an aspiring social media influencer — and his sister (Zolee Griggs), who finds herself in over her head in her dealings with the local crime boss (Glenn Howerton).

Max starts to bond with the kids after Brooks’ character starts documenting him for clout, but it becomes quickly clear, as Max rambles drunkenly on about different dimensions and planets in exchange for more booze, that he’s hardly a fit guardian for the two. For Manganiello, that’s part of what drew him to the role, in addition to its “really intelligent and batshit” script.

Manganiello likens it to the “what if” kind of comic books like “Superman: Red Son,” which posed the scenario of what would happen if Superman was raised in the Soviet Union.

Thinks is the key word there. Throughout the movie, the audience gets flashes of Max’s alleged previous life on the planet Chromium in neon, animated sequences. But Max, who speaks through a cloud of drugs and alcohol, is obviously an unreliable narrator. Still, there are “glimpses,” Manganiello notes, “where you could see that hero in him.”

But, given the nature of the character, did Manganiello see Max Fist as a superhero role?

“For me, in performance, no,” he says. “No, it wasn’t. It was about a homeless drug addict alcoholic with delusions of grandeur and thinks he’s from a different dimension. So that’s what I got to play.”

There are, of course, “elements” of the superhero story in “Archenemy,” he acknowledges. It follows in the footsteps of other movies that flipped the genre on its head — in particular, he references movies like “Deadpool” for taking a comedic spin on the serious X-Men films that came before it; “Logan,” which took Wolverine and put him in a “family road trip Western”; and “Joker,” which was was less about a supervillain and more about “a man that the system left behind.”

But he also references some of the more subversive comics like “Marshall Law” and “Irredeemable” that were bold enough to take “the genre in a different direction or weren’t afraid to break their characters apart into pieces,” he says. “That’s what we did.”

And of course, “Archenemy,” being an indie movie, had a much lower budget than some of the movies that Manganiello listed, although it still had its fair amount of ambitious action sequences. He likens a big scene to being a gymnast preparing their routine at the Olympics, with one shot to get it all down perfectly.

“On a big studio film, you’d have days to shoot an action sequence like the ones we were doing,” he says. “We would have, like, an hour or two to knock one out before we had to let everyone go for the day, because we couldn’t afford overtime. So you’re gonna get one take, and you better nail it.”

“But I enjoy that,” he adds. “I really do like that type of a challenge, as nerve-wracking as it is.”

“Archenemy” is in theaters, digital and on demand on Dec. 11.