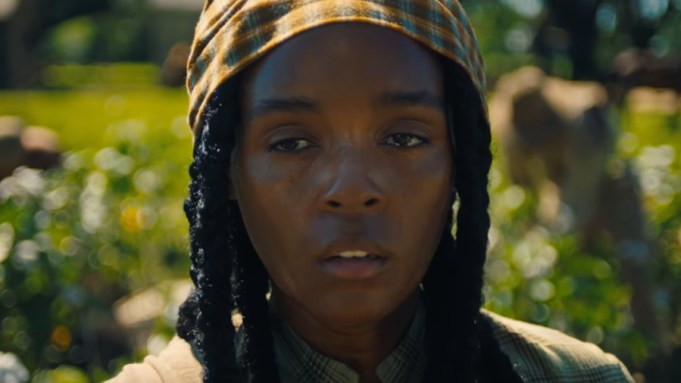 Janelle Monae is dealing with a time-traveling nightmare of slavery in Lionsgate’s latest trailer for the horror film “Antebellum.”

In the footage released Thursday, Monae portrays modern-day author Veronica Henley, shown explaining how women are the future: “We’re expected to be seen, not heard. But we are the future. Our time is now.”

But suddenly, she’s being transported back into the 19th Century as a slave in the Southern United States to come face-to-face with her ancestors. The trailer’s tagline asks: “What if fate chose you to save us from our past?”

“Antebellum” comes from the producers of “Get Out” and “Us” and is directed by Gerard Bush and Christopher Renz, also known as the team of Bush+Renz. Monae’s co-stars include Marque Richardson II, Eric Lang, Jack Huston, Kiersey Clemons, Tongayi Chirisa, Gabourey Sidibe, Rob Aramayo, Lily Cowles and Jena Malone.

Bush+Renz also produced the film with Raymond Mansfield, Sean McKittrick, Zev Foreman and Lezlie Wills. McKittrick’s credits include “Get Out,” “Us” and “BlacKkKlansman.”

“Antebellum” hits theaters on April 24 — five and a half months after Focus Features released the Harriet Tubman biopic “Harriet,” for which Cynthia Erivo received an Academy Award nomination for her portrayal as the abolitionist. “Harriet” was a solid performer at the box office with $43 million in North America on a $17 million budget.