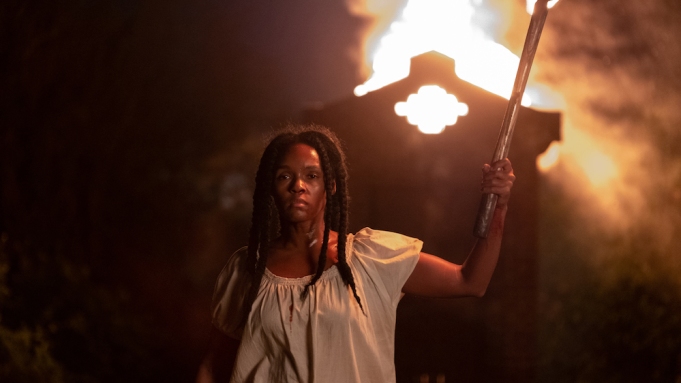 For the team behind “Antebellum,” the film couldn’t be coming at a more important moment in history, addressing America’s original sin of slavery through the lens of the horror-thriller film.

The film, directed by first-time feature filmmakers Gerard Bush and Christopher Renz, follows Monáe’s characters Veronica (a sociologist and bestselling author who focuses on the disenfranchisement of Black people) and Eden (a slave plotting her escape) as the audience learns how their paths are intertwined. The multi-hyphenate entertainer admits that she didn’t immediately jump at the opportunity to star in the film.

“It wasn’t an easy ‘Yes,’ because when you’re talking about the past, the present and what could be the future, it’s triggering,” Monáe says. “I struggle every single day when something comes across my timeline that is dealing with police and police brutality. … It’s painful to have to tell the truth about what police are doing to us or tell the truth about what happened to our ancestors.”

The film’s premise was born from a nightmare Bush had while grappling with a personal loss.

“In this nightmare, this woman Eden was screaming for help in a way that felt like she was crossing dimensions, and every little detail of that nightmare was so disorienting and unsettling for me, but when I awoke I was distraught in that I was unable to reach her and help her, I could only observe,” Bush recalls. From there, Bush and Renz put pen to paper and drafted a short story, which eventually became the film’s screenplay.

“Antebellum” will be released on PVOD on Sept. 18, and, though the pair had imagined a big-screen release for their vision, they’re focused on getting the message of the film out to audiences because they feel it’s imperative to talk about these issues right now.

“Our art is meant to activate and trigger,” Bush explains. “I would prefer that you be triggered within the safety of your own home and activated into action, then for this to happen in reality and for us to continue to live in an open-air shooting gallery.”

Though released amid the groundswell of support for the Black Lives Matter movement, the “Antebellum” team sees the film as more than simply a “timely” tale. For Bush and Renz, the plot is a warning to audiences and a reminder to really examine our past in order to prevent it from continuing into our future.

Explaining why the horror-thriller genre made an appropriate framework for the tale, Bush says, “When you tell these stories from the perspective and through the prism of the Black American experience, it can be seen as nothing less than a horror. So, in my mind, when you look at movies like ‘Gone with the Wind,’ that’s a horror film. It’s an effective piece of propaganda, but it is still a horror film.”

So, in attempt to correct the narrative, Bush and Renz used the same camera lenses that filmed “Gone with the Wind” to capture “Antebellum.”  “We used the same weaponry that was meant to misinform [and] we used it to enlighten and illuminate the truth of our past,” he explains.

Renz adds: “[Horror] also puts this message that we have buried in the entertainment and the thrill in front of an audience that may not normally perceive it. It’s sort of an easier way in for folks to make sure we’re not preaching to the choir.”

“The idea of social commentary and horror, it’s not as though there haven’t been overt kinds of social commentary in every films. If you watch old cowboy films the good guy is in white [and] the bad guy is in black,” Sidibe explains. “There are lot of different commentaries that are not true and that are actually hurtful and harmful. So, I love the idea that ‘Antebellum’ has some of what ‘Get Out’ is doing, that ‘Lovecraft Country’ is doing, it’s really, really shining light on racism and the horribleness of it and the inhumanity of it, because that is true.”