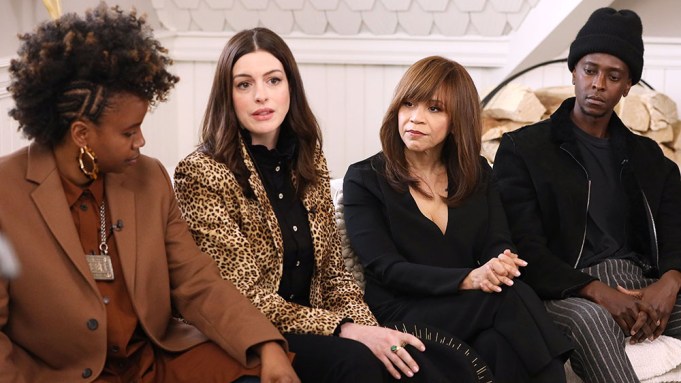 After “Pariah” and “Mudbound,” director Dee Rees returns to the Sundance Film Festival with her next feature, “The Last Thing He Wanted,” a political thriller based on a 1996 Joan Didion novel. The adapted screenplay follows a reporter named Elena McMahon (Anne Hathaway) and her photojournalist friend (Rosie Perez) as they chase a complicated story off the coast of Costa Rica.

The movie also stars Willem Dafoe as Hathaway’s father, Edi Gathegi as a man that her character meets while reporting the story, and Ben Affleck as a government official. Although “The Last Thing He Wanted” is set in the Reagan era, it still touches a nerve on what’s going on in the Donald Trump administration, with themes involving immigration and government secrecy.

“The Last Thing He Wanted” will debut on Netflix on Feb. 21. Ahead of the film’s premiere at Sundance, the cast stopped by the Variety Studio in Park City.

How did it feel to be in a Dee Rees movie?

Anne Hathaway: I woke up in the middle of the night one night and turned on the TV, couldn’t get back to sleep, and “Pariah” was on. I saw it at 3 o’clock in the morning and it hit me like a gut punch. And then I saw “Mudbound,” and that was a heart punch. And now I feel like our movie’s a head punch. So I feel like Dee Rees is moving through my chakras.

Rosie Perez: I’m in love with Dee Rees, first through word of mouth via Spike Lee, saying there’s this hot-shot director you need to check out. And I saw “Pariah” [and I was] blown away. I saw “Mudbound,” and I could not stop sobbing. After I watched it, I watched it again right after. And then I get a call and I couldn’t believe it.

Edi Gathegi: Dee and I go back to grad school. So I’ve known her for a long time, and it’s just been a true joy and pleasure watching her career flourish. Everything she does is excellent. She’s a visionary.

Dee Rees: I saw Edi at NYU, [in] some acting showcase where they do monologues. And so Edi did a monologue, you were like an 80-year-old man. And I was on the jury and I was five feet away from you, and I believed it, like “This dude transformed into an 80-year-old man.” And Rosie and Anne, these are my idols. I never thought I would get the chance to work with you.

Can you talk about discovering the Joan Didion novel and why it was important for you to adapt it?

Rees: I read this novel seven years ago, and I was just kind of hooked. For me, the thing I fell in love with was this was this father-daughter kind of story at the center. And so, I wanted to get into things we do for our fathers, and on a macro-level [the story of] U.S. imperialism.

Anne, how did you prepare to play a journalist?

Hathaway: I didn’t really focus on the journalism part, although Dee Rees was a great help in that. She put me in touch with one of her friends who’s a journalist, and I was able to get the insider look. But I really focused more on playing Elena. Very few actors get a map written for them by Joan Didion. And so between Joan’s point of view and Dee’s point of view, there wasn’t a whole lot for me to do except just ground down. One of my favorite things about Joan Didion is the way she takes us through a fog, and you’re lost and you’re lost, and then there’s a line of poetry that’s written like a scalpel, it’s so sharp. And you can experience that when you’re reading a book, but it might not translate the same into a movie. So I decided, well a fog is a fog. You can be lost in a fog of grief. You can be lost in a fog of depression. What’s going to be the most visceral for the audience? And I decided a fog of anger, and thankfully Dee agreed with me. And so, then it was about figuring out all the reasons why she was pissed off. As it turns out, women in the 1980s had lots to be pissed off about.

The movie is set in the Reagan years, but there are also parallels to what’s happening right now in the Trump White House.

Rees: It’s actually shocking. I always thought this movie was going to age out.

Hathaway: The migrant crisis really made front-page news while we were filming. Then the next level of family separation started. This whole U.S. involvement was obscured while it was going on in the 1980s, people still aren’t talking about the fact that people we’re turning away to our country, part of the reason why they’re escaping their own countries is because of us. It felt really present. It felt like, “Oh, here we are making those same mistakes again.”

Women directors are dominating this year’s Sundance Film Festival. And yet, is change happening fast enough in Hollywood?

Perez: Do I think things are moving fast enough for women? No, absolutely not. I hate when they always put us on a certain course that we have to pace ourselves because they need to catch up. It’s infuriating. I’ve been waiting on a several lines all my life. One of them is being a woman and so I’m tired. I’m tired of standing in the line. I want to cut the line, and I want fabulous women like Anne and Dee to cut the line too. It’s like, “Why do we have to wait? Why do we have to pace ourselves because you can’t catch up?” So I think that a big change has been coming, but it’s not coming quick enough for me.

Hathaway: Aren’t you ready to stop having this conversation? That’s where I’m at. People are walking the walk, people are doing it. It’s happening. I think the nature of film is that there is a lag time built in between the time that the decision to change is made, and the time that the change is represented out there in the world. I think the key is not to get lost in those in-between moments, not to panic. It’s happening. No, it’s not happening fast enough. Things are good. Things could get better. Let’s keep going. Let’s not panic and let’s keep talking about it.

Rosie, you showed such strength a few days ago, when you testified at the Harvey Weinstein trial. What was that experience like for you and are you hopeful of the outcome?

Perez: All I can say is that I’m not at liberty to comment on it. The one thing that I will say is that when you need somebody, you always hope somebody is there. So I’m glad I was there. [She starts to tear up.]

When you’re ready, can you tell us a little about how you created your character?

Perez: Yeah. I’m good. One of the most brilliant lines of direction that Dee gave me, she says: “Your character, she’s the veteran here. She’s been there.” And so there is a pivotal part of the script for my character and I was rehearsing it on set and in the scene, I’m supposed to be uptight. And I was practicing and practicing and practicing. And I look up, and she goes, “Okay, we got it.” I was like, “You’re so fly, I can’t stand you right now.”

Rees: Because you were in the zone, in the mode.

Perez: I can’t believe that. I was in awe of her. For me personally, this means so much to me as, this movie. It’s important to me as a Puerto Rican woman because I love America, but America dumps on us. Hurricane Maria is a perfect example. The mass migration on the Southern border is another perfect example. And I can go on and on. Homeland Security just makes these obscene, immoral raids. It just keeps going. And you ask yourself, “When is the insanity going to stop? When is fairness going to come into play?” So, for me, I am very proud to be part of this project.