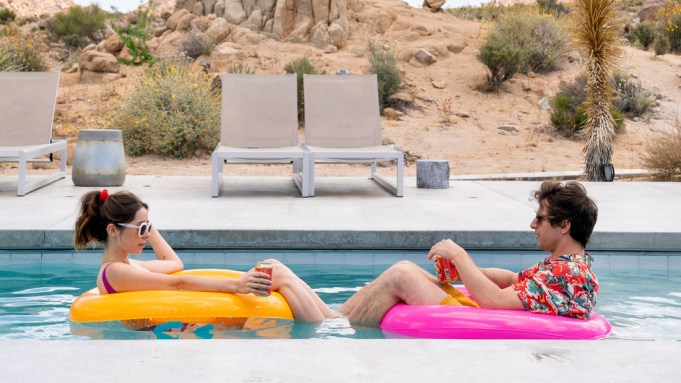 Andy Samberg’s romantic comedy “Palm Springs” is hitting Hulu just in time for summer. The movie, which premiered at Sundance Film Festival, was expected to first release in theaters, but will instead launch directly on the streaming service on July 10, along with some drive-ins.

The announcement is surprising, given how much Neon and Hulu shelled out for the movie at Sundance. “Palm Springs” broke records for the biggest sale in the festival’s history, selling for a massive $17.5 million — and 69 cents. Some sources say the auction was even bigger than initially reported, with estimates closer to $22 million.

The splashy price tag came with the understanding that Neon would execute a traditional release in theaters for “Palm Springs” before it graced Hulu. The decision to skip the big screen is not completely unexpected, however, since movie theaters have been closed since mid-March due to the coronavirus pandemic. Though multiplexes in some states have been given the go-ahead to reopen, there isn’t a clear sense when they’ll be able to resume business at a larger scale.

“Palm Springs” debuted to positive reviews out of Sundance. Variety’s chief film critic Peter Debruge praised the movie, writing, “This ironic, irreverent and at times insane rom-com from the Lonely Island gang does something new with a genre audiences have experienced a million times before.”

Though plot details have been intentionally vague, director Max Barbakow described the film as a nihilistic wedding rom-com that’s “fun” and “a little bonkers.” It follows Samberg’s character as he attends a wedding with his girlfriend in Southern California. The cast also includes Cristin Milioti, J.K. Simmons, Meredith Hagner, Camila Mendes and Peter Gallagher.

“We’re subverting a lot of the tropes you usually see in wedding movies and rom-coms,” Barbakow told Variety at Sundance. “Tonally, it’s that really nice charged area between laughter and deep feeling and then just bonkers stuff. We’re trying a lot of things.”