America Ferrera: ‘For a Very Long Time, I Felt Very Alone and Isolated as a Latina in This Industry’ 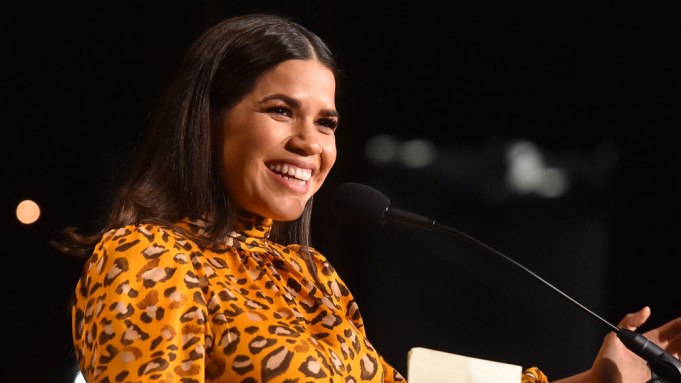 Even though she won Hollywood’s top TV awards, including an Emmy, Golden Globe, and Screen Actors Guild Award for her lead role in “Ugly Betty,” America Ferrera felt on her own as a Latina actress.

“For a very long time, I felt very alone and isolated as a Latina in this industry,” Ferrera said Friday at the National Hispanic Media Coalition’s 2020 Impact Awards Gala in Beverly Hills. She won the outstanding series producer impact award for her producing work on “Gentefied” and “Superstore.”

Ferrera paid tribute on stage to her “Real Women Have Curves” co-star, Lupe Ontiveros, who died in 2012, when talking about the sacrifices of previous generations of Latinx entertainers. Ontiveros’ credits included “Selena,” “Chuck and Buck,” and “Desperate Housewives,” the latter for which she was nominated for an Emmy.

“We are living in an era brought upon by many, many generations of Latino and Latina actors, producers, writers, directors, who stayed the course, and they paved the path,” Ferrera said. “I’m thinking especially about one of my own personal heroes, Lupe Ontiveros, the late and wonderful actress, who I always call our Meryl Streep. I was lucky enough to work with her so early on in my career in ‘Real Women Have Curves.’ I was 17 years old. I realized that she got so few opportunities to share the depth of her talent with the world. When I think about Lupe, I think about what a loss it is, for all of us, when talent goes untapped. So, as a producer, [I’m] bringing opportunity to the Latino community, and helping to build a pipeline for our stories to be seen and to be celebrated and for our talent.”

Just hours before the gala, NBC announced that Ferrera would be leaving her starring and producing post on “Superstore,” at the conclusion of the show’s fifth season in April.

“I believe different voices need to come into the mix. Storytelling is what we do, bringing the most amazing creators to life,” Sarnoff told Variety. “This movie, ‘In the Heights,’ with Lin-Manuel and Jon Chu, Quiara, it’s what I’m most proud about, working at Warner Brothers.”

She added, “I think [the movie is] a celebration of community and heritage. I think, right now, in our country, in particular, we need to celebrate difference. Our roots and where we all come from, the fact that we’re all living together and we’re stronger together.”

After its release last week, “Gentefied” has enjoyed Top 10 status on Netflix. Numerous cast members attended Friday to support Ferrera. “What’s truly an honor is being here, being celebrated as a Latina, but also knowing that we’re at the forefront of our stories,” Karrie Martin, who plays Ana Morales on the show, told Variety. “We’re no longer just the side, the supporting. Everybody here is a lead of their own story, and that everything is for this Latino community.”