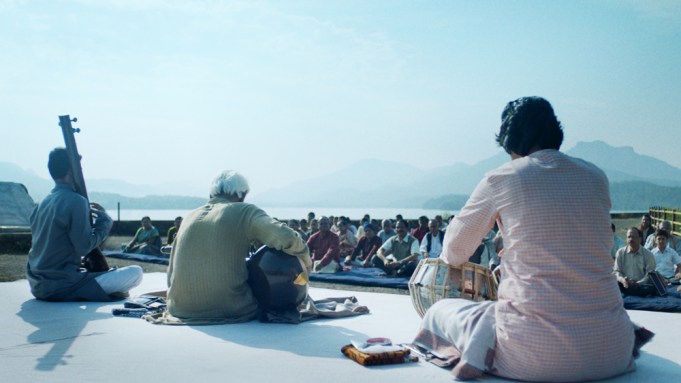 Chaitanya Tamhane’s “The Disciple,” the first Indian film in Venice Film Festival’s competition since 2001, is set across three different time frames. It follows an aspiring classical music performer, Sharad Nerulkar, played by debutant Aditya Modak, on a journey that resembles that of a monk following a guru, experiencing sacrifice and solitude along the way.

The culture surrounding Indian classical music is a very specific one, Tamhane explained at the film’s press conference Friday. “It’s an 800-year-old tradition. People who are not familiar with it often think it is a niche, dying subculture,” he said. “But on the contrary, it is an ever-evolving artform, rich, non-static tapestry that has impressed and inspired many Western musicians, including Philip Glass, John McLaughlin and The Beatles.”

Tamhane started the project with zero knowledge on the subject, he said, but two years of reading, traveling, interviewing and attending concerts made him “obsessed with it.” This environment is not as male-centric, as one could presume, Tamhane said. “It was a very male dominated world, but it started changing in the 20th century, after Independence. As of now it’s not even a question, there is no gender disparity in this field.”

Finding an actor who could carry the film, wasn’t easy. Tamhane needed a practitioner of this style of music who spoke Marathi, had screen presence, could act, and was able to commit. “Even Aditya at one point didn’t make it because he looked different,” the director jokes. “We asked him to undergo a transformation and he agreed, despite being a busy professional. It was a leap of faith for us both. As Aditya has spent almost 20 years learning classical music himself, Sharad’s journey was very relatable to him.”

Tamhane explained how Alfonso Cuaron became an executive producer on the film after he met him through the Rolex Mentor and Protégé Arts Initiative program. “I observed him working on set and in post-production on ‘Roma,’ and we became friends,” he said. “He was involved in spirit while I was writing, and gave me tips on editing. His faith and support have been a gamechanger.”

When Tamhane asked who would be a perfect cinematographer for the project, Cuaron’s D.P. Emmanuel Lubezki suggested Michal Sobocinski, whose film “The Art of Loving. Story of Michalina Wislocka” had won the best Polish film award at the Camerimage Film Festival.

“It was beautiful teamwork, great prep,” Sobocinski said. “We checked every lighting, every wall color. This is why the film looks this way. The character of this movie is Mumbai itself. We didn’t want to show the city as a postcard.”

Tamhane, born and raised in Mumbai, agreed. “Mumbai can influence your psyche, insecurities, aspirations. How to survive – and keep on artistic track – in that ever-changing environment became a conflict we tried to explore.”

Producer Vivek Gomber was happy to back the film after Tamhane’s previous Venice entry, “Court,” won the best film award in the Horizons section and the Luigi De Laurentiis Award for the director. The film’s selection at Venice has justified his confidence in the project, although the terrible effects of COVID-19 cloud their plans for a followup.

“Things are still bad back home. Bombay has been in lockdown for seven months. Two days ago the crew had dinner together in Venice for the first time since we wrapped. So it is tricky to comment on future plans. But we have faith. We are in the best place to start – premiering here, in Venice, in such a great lineup.”

He added: “What comes next? You have to roll with the punches. I think this year, in a strange way, is a good moment to watch this film, pause and ask bigger questions.”