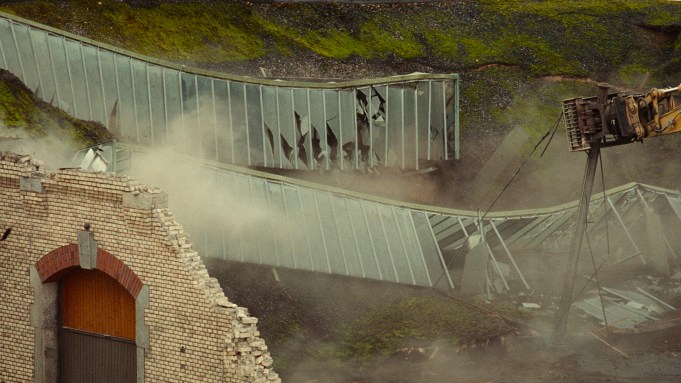 Thomas Imbach didn’t have to go far for the inspiration and execution of his latest feature documentary “Nemesis,” which premiered in the International Competition section of the digital version of Switzerland’s Visions du Réel documentary film festival and now plays in IDFA’s main competition section.

Shot over seven years from his own window, a trick Imbach previously used in 2011’s “Day is Done,” the film tracks the demolition of Zurich’s historic freight railway station and the subsequent construction of a massive, industrial prison where three quarters of the inmate population is likely to be immigrants, if it matches national averages.

As the train station crumbles beneath the metal jaws of an excavator, Imbach tells stories from his past and the impact the station has had on his own life. Once construction begins on the towering penitentiary, the stories shift to those of immigrants awaiting deportation, collected by Imbach’s assistant Lisa Gerig. The heartbreaking tales of confused and scared prisoners, not convicted of any crime yet serving sometimes years-long sentences, accompany construction until the city is no longer visible behind the stories-tall behemoth.

Imbach discussed the film and its execution with Variety ahead of the April 25 digital premiere.

At times this film feels almost stop-motion animated. Can you talk about how you used sped-up footage and sound to create that effect?

I did all the speed up and slow-motion effects in the 35mm camera.  I shot a lot at three frames per second. It looks quite different than if I’d have done it in post. Basically, my intention was to use the sound to make the pictures palpable. My sound designer Peter and I are both long-standing Jacques Tati fans, so he was really inspired and created sound effects like a musical score.

Where did the idea come from to include anecdotes from your own life in this story about immigration, incarceration and how they are intertwined in Switzerland?

I started the film seven years ago because it broke my heart when they started to demolish the old station. I think it will soon be recognized as a major act of architectural vandalism in Switzerland. The slow death of my long-time neighbor made me think about time passing; sensations which stretch from early memories of the death of my grandfather, to the more recent experiences of when a filmmaker friend succumbed to cancer.

You start the film with the demolition of the train station but end it before the completion of the new police/prison complex. Why did you end the film before the building was finished?

I already had enough footage to make two films! More important was the fact that I was never interested in the new building as an architectural event. I explored what it represented. Once the shell of the building was finished this was apparent; so I left it standing as a ruin.

“They take their work seriously” you say at one point of the construction workers, before praising them as peasant workers. Do you see yourself as a peasant filmmaker? What you saw and admired in the workers in your film, is that something you strive for in your own work?

They are more old-fashioned, less domesticated. They made me think of Pasolini’s non-actors in “The Gospel According to St. Matthew.” Ironically, they are a contrast to the trend the film depicts towards a total security apparatus.

And of course, I’m a peasant filmmaker.  One of my theses is that we don’t have any great-grandfathers and mothers in cinema because we were a peasant country until WWII.

The stories used to narrate the film are heartbreaking, and now likely to occur day in and day out across the street from your home. How does it affect your living situation knowing so specifically how the people across the street are suffering?

The testimonies of the refugees come from my assistant Lisa, who has been visiting prisoners awaiting deportation for years. As for the new prison and police center, I ask myself many questions about what right we have as a society to deprive people of their freedom who have not been convicted of anything.

You caught some amazing candid moments, bordering on voyeurism, but you also referenced moments of vandalism that only appear in the film as narration. How dedicated were you to this shoot? That is, were you spending months on end like Jimmy Stewart in “Rear Window,” or was most of what you caught on film a matter of being home when interesting moments passed by outside?

I previously shot another film out of my window over 15 years (“Day Is Done,” 2011). So, I am used to filming by instinct. I never shot with a plan, it all happened in between my life and other work. Of course, I missed a lot, but that was part of the game. With the demolition of the old station it was not possible to foresee exactly when one of the roofs would collapse. So, there I had to make an exception, and waited behind the camera for hours with my finger on the trigger.