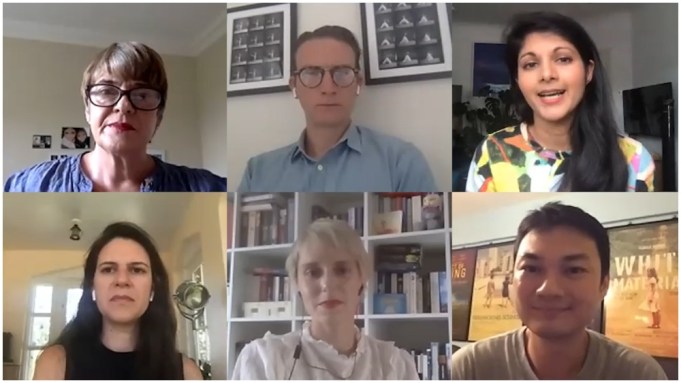 Warner Bros.’ game-changing plans for the international-led roll-out of Christopher Nolan’s “Tenet” are helping distributors such as Neon hammer out their own release strategies into the fall.

Speaking as part of a Variety Streaming Room event with the Locarno Film Festival’s StepIn industry program, Neon president of distribution Elissa Federoff said the global release — which will see the thriller launch in countries such as the U.K., France, Korea and Turkey a week ahead of the Sept. 3 U.S. release — is “great re-strategizing and pivoting” on the part of the studio.

“It’ll be really good for the U.S. to see how that goes because we’re trying to make plans of our own and the best thing we’ve had to look at, science-wise and industry-wise, are other parts of the world and seeing how they’re moving forward,” added the executive, noting that some of the international releases will “really help us figure it out.”

Federoff says Neon, which distributed Oscar winner “Parasite,” has picked up “a bunch of films” since March, and navigated some innovative release strategies for titles such as Matt Wolf’s “Spaceship Earth.” The Sundance documentary launched stateside in May across drive-ins as well as with virtual cinemas and non-traditional partners such as museums, libraries and bookstores.

“We’re constantly thinking about the innovation of what we’re going to do and how we’re going to release films theatrically, because we absolutely want to,” said Federoff. “We know people are hungry for this stuff. We know they’re hungry for genre, for an arthouse film, for a period film, for whatever, and we really have to think about how we can bring it to them.”

Neon films such as Amy Seimetz’s horror “She Dies Tomorrow” will have a seven-day drive-in window before going to VOD on Aug. 7. Other films in the pipeline include Brandon Cronenberg’s “Possessor” and Francis Lee’s “Ammonite.”

The Streaming Room event was recorded on July 27, hours before Warner Bros. officially confirmed its international-first strategy for “Tenet” — and days before the Universal-AMC Theatres deal and Disney’s premium VOD play for “Mulan” — but, even so, Laura Houlgatte, CEO of the International Union of Cinemas, was vocal in her support of “Tenet’s” halo effect for global exhibitors.

“Our cinemas are open, but at the moment they’re desperate for new and strong content,” said Houlgatte, a fierce advocate for the theatrical model. “There’s no question that we understand, of course, the challenges faced by the studios, but they also have to understand where we are right now.”

“For us as cinemas, we are talking about survival,” she said. “And frankly, we can’t afford to wait for 100% of screens to be open around the world.”

Part of the reason U.S. tentpoles carry so much weight, particularly in the current climate, also has to do with the optics of what’s open and what’s closed, said Allison Gardner, CEO of Glasgow Film.

“‘Tenet’ will help us because [there is a] perception that cinemas are back in business with new products,” said Gardner, who runs the Glasgow Film Festival as well as the Glasgow Film Theatre cinema. “Let’s face it, [studios such as] Warner Bros. have the big bucks to spend on advertising. It’s not the same for smaller distributors; we don’t have that revenue to spend on our product.”

Smaller outfits such as Singapore’s Anticipate Pictures, however, are still managing to seek out new opportunities in trying conditions.

Vincent Quek, CEO of the arthouse distributor, which recently released Werner Herzog’s “Family Romance, LLC.” in Singapore despite the country’s restrictive 50-ticket capacity on theaters, says he is fielding avid interest in a range of smaller titles.

“The exhibition partners I rely on are suddenly asking me — when they wouldn’t otherwise ask previously because I had such small films — ‘Do you have any new films you want to release?'” says Quek. “I absolutely do, but now the problem becomes not releasing them too quickly…I think cinemas are really starting to realize the consequences of relying too much on tentpoles.”

Providing an agent’s perspective on the future of theatrical releases is United Talent Agency’s Mikey Schwartz-Wright, who predicts the types of films screened in theaters will be markedly changed by the pandemic.

From a packaging and financing perspective, Schwartz-Wright says the films that are currently “closest to the finish line” are “relatively contained, with fewer [main] actors, and movies that can be shot in one or two locations on a soundstage.”

“Once this wave of movies can actually get into production, there will be a certain type of — not even a genre — but almost a look of movie that will have been producible in this climate,” said Schwartz-Wright.