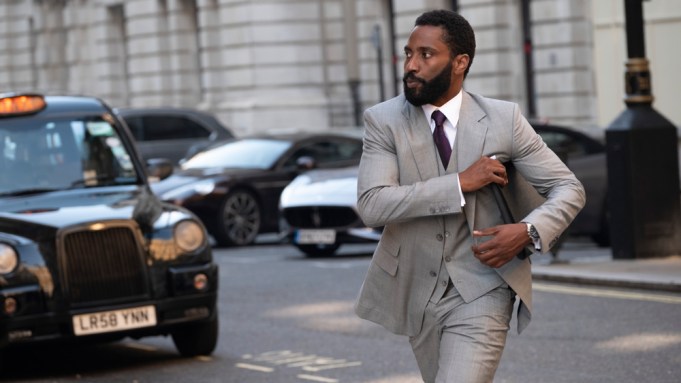 London’s Leicester Square, a bustling area best known for its glitzy film premieres, was eerily quiet on Wednesday morning. Flashy billboards for Christopher Nolan’s “Tenet” lit up the adjacent Odeon and Cineworld venues, but audience members were in short supply.

Cineworld claimed one of the earliest London showings of the film with a 10 a.m. 2D screening, followed by an 11 a.m. IMAX appointment. In pre-pandemic times, you might have expected a decent turnout for the earliest screening, but a Cineworld manager told Variety only four tickets were sold in the 80-seat venue — a low figure, even if some of those seats would have been blocked out due to COVID-19 measures.

Mario Coral was one of those ticketholders. The early start was simply the most convenient time for his schedule, but he admits that, traditionally, you’d see these screenings fill up when other, more popular times, sell out. For the London-based reception manager, who isn’t currently working, “Tenet” marks his first cinema trip since lockdown. “This is one of the first things I’m doing that feels ‘normal,’” he says.

At North London’s newly renovated Odeon Holloway Road, which opened Aug. 25 for the first time since 2019, the day’s first screening at noon — which kicked off 13 showings across the day — was similarly quiet. “It’s the first show of the day on a weekday, so the cinema is very empty and certainly looks like it’s been thoroughly cleaned,” Narain Jashanmal, a former filmmaker and cinema enthusiast, told Variety.

“The few other patrons are, like me, wearing a mask. The public areas have been reorganized to facilitate foot traffic and encourage distancing. I’d say I feel reasonably safe but I don’t see myself going to shows at busier times,” Jashanmal says.

Back at the Leicester Square IMAX screening — again, one of the first public showings in London — the 640-seat theater was at 15% capacity, with just 100 tickets sold. Of course, with 30 screenings of “Tenet” over the day across six screens, later showings may have drawn more cinemagoers.

Rattling off a list of older films and re-releases he’s seen since cinemas opened July 4, Joseph Sciberras Margrie, a VFX artist, isn’t concerned about face coverings, which are mandatory in cinemas, save for eating and drinking. “I’ve been to the cinema many times and I’ve worn it…I do wash my hands and protect myself.” His friend, Shadeque Khaluque, dangles from his wrist a small pouch containing his mask.

“When I saw the trailer, I was mind-blown, though I didn’t really understand a little bit of what was going on,” said Sciberras-Margrie, brows furrowed. “But that’s the thing with [Nolan’s] films: you go in there and you see it get explained and everything,” he added excitedly, making a ‘mind blown’ gesture with his hands.

Inside the auditorium, sobering coronavirus-focused ads for the U.K.’s National Health Service preceded trailers, which included “No Time to Die,” “Wonder Woman 1984,” “The King’s Man” and “Black Widow.” Ahead of the film, a Cineworld staff member said screen checks would take place throughout the film. “It’s good to see you here,” they ended softly to energetic applause from the audience, sat with empty seats between groupings.

Following the screening, minds were indeed blown. Asked what they made of the film, siblings Sanvir Singh Chana and Ramneek Chana, who saw the 170-minute feature together, looked uneasily at one another. “Um, I think we’re going to have to watch it again,” said Sanvir.

Meanwhile, walking out of the cinema, Andrew Anastassis and his partner Hannah Carter deemed the film a “masterpiece.” “I’ve never seen a film like ‘Tenet’ before,” said Anastassis.

In France, exhibitors rolled out sneak previews for “Tenet” two days before its official release on Aug. 26, with tickets going on sale a week prior for major venues such as the Grand Rex Theater in Paris. But while the anticipation for the movie ran high, sneak previews didn’t sell out at the Grand Rex.

The venue, which boasts Europe’s biggest screen, had closed on Aug. 3 due to the dearth of fresh releases, but reopened on Monday, in time for “Tenet.” The Grand Rex hosted an 8 p.m. screening with French dubbing, and an 8:20 p.m. screening in its original version, with far more moviegoers — a young, mainly millennial crowd — than the dubbed edition.

Under current sanitary guidelines, moviegoers had to wear face masks only in public areas of the cinema, such as ticket booths and bathrooms. But once inside, people had them off once seated. Meanwhile, a seat between each group of moviegoers was left empty.

For many, the outing marked the first cinema screening since the coronavirus crisis. “We are very excited to be back in a theater for a movie. It’s been a very long time, and it’s for Christopher Nolan,” said one moviegoer.

Emerging from the screening, most people interviewed said they didn’t understand the movie and will need to see it again. “It’s so complicated to understand what happens, and at the same time, it’s so amazing…To think how he shot that film. The mechanism is so complex…At times you think you understood something and then five minutes later, you realized you didn’t understand anything,” said a patron.

“It’s great to see that cinemas are still alive in France because these are hard times,” said another moviegoer. “It’s important for us to support the theaters because we love them so much.”

Asked about the experience of wearing a mask inside the venue, moviegoers said it wasn’t an issue because they removed them once seated. However, that’s soon set to change: France Prime Minister Jean Castex said Wednesday that face coverings will now be mandatory in all areas of theaters and live venues, even inside screening rooms.

Naman Ramachandran contributed to this report.