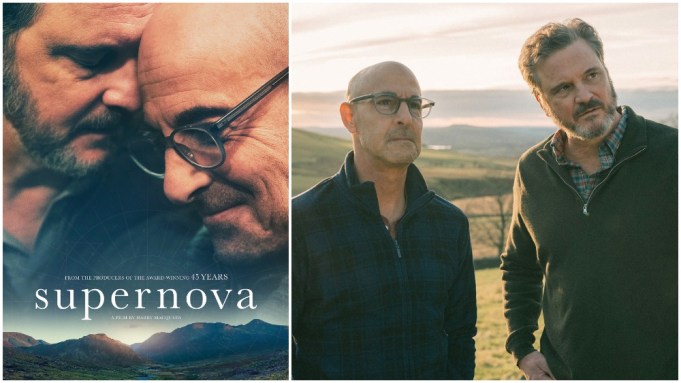 Colin Firth and Stanley Tucci star as a couple traveling through England in an old RV visiting friends and places from their past in “Supernova.” Check out the trailer for the film above, shared exclusively with Variety.

Written and directed by Harry Macqueen (“Hinterland”), “Supernova” is billed as a modern love story centered on Sam (Firth) and Tusker (Tucci), partners of 20 years who are traveling the country in a bid to reconnect with their past amid Tusker’s early-onset dementia diagnosis. As the trip progresses, their relationship is tested like never before. Ultimately, they must confront the question of what it means to love one another in the face of Tusker’s irreparable illness.

Firth won an Oscar, a Golden Globe and a BAFTA for his portrayal of King George VI in “The King’s Speech.” His performance in “A Single Man” also won him a BAFTA and an Oscar nomination. His next projects include “Mothering Sunday” and “Project Mincemeat.” Meanwhile, Tucci was nominated for an Oscar for “The Lovely Bones” and has appeared in the “Hunger Games” movies and “The Devil Wears Prada.” He recently wrote and directed Alberto Giacometti biopic “Final Portrait” and next appears in the new film adaption of Roald Dahl’s “The Witches.”

“Supernova” is produced by Emily Morgan of Quiddity Films (“I Am Not a Witch,” “Make Up”) and Tristan Goligher of the Bureau (“45 Years,” “Lean on Pete,” “Only You,” “Weekend”). Financiers are BBC Films and the BFI, while The Bureau Sales is handling international sales. Executive producers are Mary Burke, Vincent Gadelle and Eva Yates.

“Supernova” is distributed by Studiocanal in the U.K., Madman in Australia, CDC in Latin America, Lev in Israel, A Really Good Film Company in Hong Kong and Bir in Turkey. The film has also sold into Germany and Austria (Weltkino), Japan (Culture Entertainment), Benelux (Cineart), Taiwan (Catchplay), Penny Black (Airlines) and Scandinavia (Scanbox).