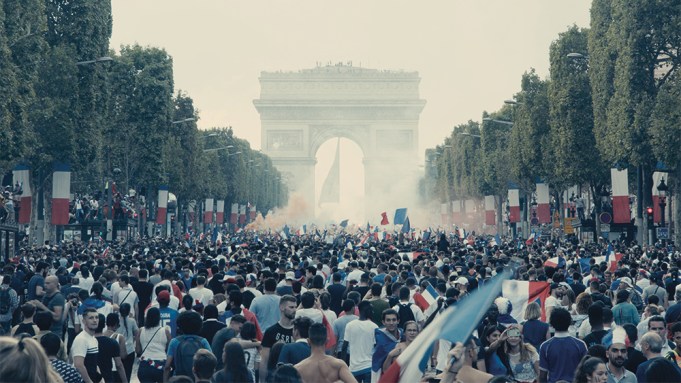 Ladj Ly had already beaten the odds by world premiering in competition at Cannes and winning the jury prize with his feature debut “Les Miserables.” Ly has now scored an Oscar nomination for his politically-charged film in a particularly competitive year for the international feature film race.

One of the five movies selected out of 93 movies submitted, the police brutality drama “Les Miserables” will face two other Cannes competition titles, Bong Joon Ho’s Palme d’Or and Golden Globe winning “Parasite” and Pedro Almodovar’s “Pain and Glory,” as well as Jan Komasa’s “Corpus Christi,” which opened at Venice Days and Tamara Kotevska and Ljubomir Stefano’s “Honeyland” which won three awards at Sundance, including the Grand Jury Prize.

“Les Miserables,” which was bought by Amazon for the U.S. at Cannes where the film earned stellar reviews, was inspired by the 2005 French riots, a three-week period of civil unrest characterized by violence, looting and car burnings. The film examines the tensions between neighborhood residents and police that helped inflame the rioting. It centers on Stéphane (Damien Bonnard), who has recently joined the anti-crime brigade in Montfermeil, and his two partners (Alexis Manenti and Djibril Zonga). The men find themselves overrun during the course of an arrest.

The film was sold around the world by Wild Bunch International and was produced by Toufik Ayadi and Christophe Barral of SRAB films. Giordano Gederlini and Alexis Manenti co-wrote the film alongside Ly. “Les Miserables” was released in France by Le Pacte and has so far sold more than 1.5 million tickets, a rare box office performance for such a modestly-budgeted film.

On “Les Miserables” being nominated for best international feature in this year’s highly competitive race:

Of course it’s an ego boost! But it’s not the most important. It means so much to my children, to the children of Montfermeil, to all the children in France and around the world. To show them that it’s good to have dreams, and that they shall not hesitate to fight and even launch a revolution when necessary to make their dreams come true… I’m not going to trivialize this nomination like politicians trivialize problems!

On how he perceives the Oscars:

From Paris, it seems very far away, a little aging, very white with not a lot of women… but then I went there and I met people, not just members, but women and men who are above anything film lovers, and there I realized that these people were engaged and reacted even much stronger than in France. And I also saw the work of the work of the Academy and their desire to watch films from around the world. And now that I’m going to become a member, it might even give more opportunities to speak out.

On being ready to campaign for Oscar gold:

I’ve been campaigning for this film for 15 years! More seriously, it’s been a year that we’re campaigning; it started in the run up to the Cannes, we fought to be in competition, to win the Jury prize, and the film went on to play at other festivals, the premieres, etc. It’s been an every day adventure, not a campaign, which has allowed me to meet so many great people. We’ll go all the way! There is a sentence by Mark Twain that we like: “They did not know it was impossible so they did it”

On meeting Spike Lee, who gave his full support to “Les Miserables” after watching the film:

Filmmakers like Spike Lee have always been models for me and he made me want to make movies. At a time where so many young people were struggling to identify themselves in movies in France… “Do The Right Thing” was one of the films which inspired “Les Miserables” and meeting with Spike Lee made me proud because I saw that my work could strike a chord on the other side of the Atlantic.

On whether this Oscar nomination could give a more powerful echo to “Les Miserables” and what it stands for?

I use my camera like a rubber bullet, but I also know I have responsibilities and I always try to be as fair as possible. I’ve made mistakes in my life, I paid for it, I’m not perfect, but today I aspire to be a model for kids from underprivileged suburbs. I hope this nomination will give some visibility to the Kourtajmé school (the film school he opened) and that similar other schools will open elsewhere. I want to believe that opening a school, it’s shutting down a prison. But more than anything, if the nomination can at least spark a debate and some awareness then we will have made a little step forward… Revolutions have always started with one person…