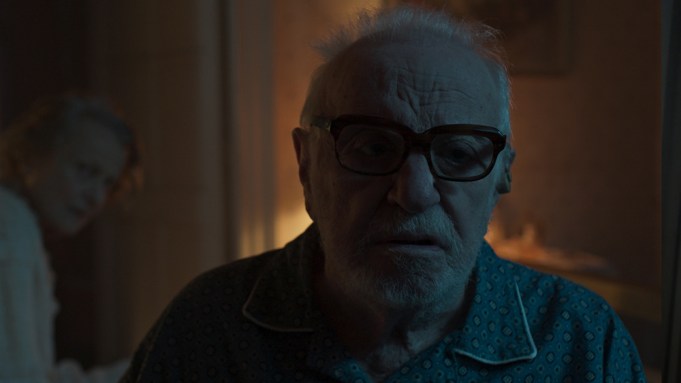 U.K.-based distribution company Alief has secured global sales and remake rights for “Nocturna,” sides A and B, from writer-director Gonzalo Calzada.

The British distributors have also shared with Variety an exclusive trailer from the film’s upcoming marketing campaign, set to kick off on Dec. 1 at the multi-city Ventana Sur market.

At last year’s Blood Window genre showcase, one of Ventana Sur’s prominent sidebars, the Nocturna films were screened as works in progress. Both were finished shortly thereafter and scheduled for a 2020 release which was postponed due to the COVID-19 outbreak. A possible silver lining of the delay, the films were able to screen a preview at October’s B3 Biennale of the Moving Image in Frankfurt, building buzz ahead of their market premiere.

“Nocturna: Side A – The Great Old Man’s Night” follows a nearly 100-year-old man who, on his final night on earth, fights for redemption from his life’s misdeeds. In “Nocturna: Side B – Where Elephants Go to Die,” Calzada embarks on an aesthetically opposite experimental twist of the same story. In the trailer shared by Alief, we see the two worlds mixed together, and witness the elderly gentleman’s struggles with grief and dementia, and how it affects those around him. Whether or not the supernatural aspects of the trailer are real or imagined is unclear, and only likely to be revealed in the full films, if at all.

“Nocturna is inspired by my grandparents, and the type of relationship they had with each other,” Calzada explained to Variety ahead of this year’s Ventana Sur. “It’s also about the meaning of aging in a society that is imperceptive about seeing this reality. It shows the self-confidence of the twilight years as a unique possibility of redemption and connection with the truth of one’s being.”

“I tried to show how the loss of memory can operate as a release from emotional shackles and allow an individual to be a free and full person for the first time since childhood,” he went on, explaining how dementia can reveal paradoxical aspects of a person as the disease progresses.

“Nocturna” is headlined by Argentine actor and playwright Pepe Soriano, a 50-year industry veteran, three-time Argentine Critics Association Award-winner, Spanish Academy Goya Award nominee for his role as Franco’s double in “Wait for Me in Heaven,” and Valladolid best actor winner for his work in “El ultimo tren.”

Marilu Marini, a star of French genre films from the ‘70s and ‘80s, plays opposite Soriano in a continuation of her career renaissance which includes 2017’s “Los Que Aman Odian,” Argentina’s 2020 Oscar submission “The Sleepwalkers” and Netflix’s French series “Vampires.”

“We are thrilled to represent the latest work from one of Argentina’s leading fantastic filmmakers. The ‘Nocturna’ experience is tailor-made for our current times “ said Brett Walker, managing director at Alief.