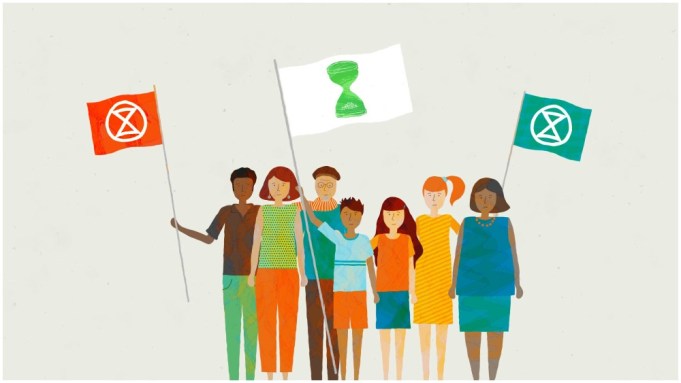 Released Friday, the animated explainer video titled “Extinction Emergency, and Why We Must Act Now” summarizes the planet’s biodiversity loss, runaway consumerism and the current ecological crisis and how the consequences will affect millions of lives around the world. Featuring direction, design and animation from frequent Extinction Rebellion creator Miritte Ben Yitzchak, and written by Matthew Shribman, the video is scored by English music legend Brian Eno.

“I’m terrified to see that in my lifetime, so much of our planet has been destroyed by the relentless greed of humans,” said Harris. “Scientists, who have been calling out for us to change our ways have been ignored by governments. Thankfully the heroic Greta Thunberg, followed by Extinction Rebellion, emerged into the spotlight to fight for climate justice.

“I care passionately about animals and our environment, and I find the extinction of so many of our species heartbreaking. I’m proud to be able to lend my voice to this project, which I hope will inspire viewers to get behind the ambitions of Extinction Rebellion with a great deal of urgency,” added the actor.

The video is the latest in a series of film shorts released by Extinction Rebellion over the past year in order to call global attention to environmental issues. Others in the series include animation “Climate Change and Why We Should Panic,” voiced by Keira Knightley; live action “Guardians of Life,” starring Joaquin Phoenix, Adria Arjona, Oona Chaplin, Rosario Dawson, Albert Hammond Jr., Q’orianka Kilcher and Matthew Modine; and animation “The Gigantic Change,” featuring the voices of Whoopi Goldberg and Livia Nelson.

“The way of getting brand recognition for Extinction Rebellion is to collaborate with animators and famous actors in order to get the message and the information to a much wider audience,” the org’s head of marketing and distribution Jonathan Mintram told Variety.

“When we go to the streets, [it] is often portrayed as disruptive and negative by mainstream right wing media. [But] if people have come across Extinction Rebellion through Keira Knightley, Joaquin Phoenix or Whoopi Goldberg, there is a recognition.”

“This is a way of people thinking of Extinction Rebellion as more than a direct action group, [and rather] a group that really tries to push the boat in terms of content and education through that content,” says Mintram.

Once the pandemic has passed, the org’s next step is to create a further set of 10-12 awareness films about the climate and ecology emergency featuring well-known Hollywood directors and actors — a process that was about to kick off when coronavirus swept the world. An animated series for children between the ages 6-12 made by young science educators that touch on hot button topics but in a way that can be consumed by the age group is also in the works.

Before the next stage of its video initiative, however, Extinction Rebellion is looking ahead to its next U.K. rebellion, which is set for Sept. 1, when the U.K. Parliament returns after summer recess.