“Ouf!” – “Phew!” in French: the sigh of relief was the first word to appear in the inaugural clip at the opening ceremony of Lyon’s Lumière Festival, which kicked off on Saturday night as the city was put on maximum alert amid the coronavirus pandemic.

While attendance numbers are limited, cinemas remain open in France and the festival will be able to go ahead as planned.

Led by Thierry Frémaux, who is also head of the Cannes Festival, it is one of the world’s leading classic film events, which celebrates both heritage cinema and more contemporary works. Among those, audiences will be able to discover no less than 23 premieres originally meant to be screened in Cannes before the festival was cancelled in the wake of the global lockdown.

This year’s opening ceremony, which normally takes places before a full house of more than 5,000 people in Lyon’s abattoir-turned-concert hall Tony Garnier, was a muted, almost intimate affair, without the usual sparkle and glitz.

Speaking to a crowd of a thousand – in line with regulation – Frémaux told them that this was the year they had planned to celebrate the 125th anniversary of the Cinematograph, which was invented in Lyon by the Lumière brothers. “But,” he said, “we couldn’t have chosen a worst year… even the war didn’t close down the cinema theaters. Nor the restaurants and bars, for that matter!” He reminded the audience that cinemas reopened in France on June 20 but have remained closed in other places. “You hear a lot about the death of cinema these days,” he said, “but we don’t believe it.”

It is not the first time the festival director has expressed this view, likening cinema to soccer, saying crowds will go back to the stadiums in due course, as they will to the big screen. “You have to wear a mask in cinema theaters, it is a place where people feel safe and they are returning,” he added.

Echoing Frémaux, a clip of an interview with Jean-Pierre Dardenne, who is being awarded this year’s Lumière Prize along with his brother Luc, was shown on the large screen behind him: “Without the gaze of others, cinema doesn’t exist”, said the Belgian director.

A stellar turnout of celebrities attended the ceremony, only removing their face masks to allow photographers to take a few shots, before replacing them and taking their seats. Among them, Oliver Stone will be showing a newly-restored version of “Born on the Fourth of July” and presenting his memoir “Chasing the Light” in Lyon.

Actor-turned-director Viggo Mortensen, Danish director Thomas Vinterberg  (“Festen”) and actor Mads Mikkelsen were there, too. They are presenting, respectively, their Cannes selected films, “Falling” and “Drunk”, for which Mikkelsen picked up best actor at the San Sebastian Festival last month. Other guests of honor include Italian filmmaker Alice Rohrwacher, whose latest short “An Agricultural Prayer”, a collaborative work with French artist JR which has been described as a peasant homily, was screened at the opening ceremony. 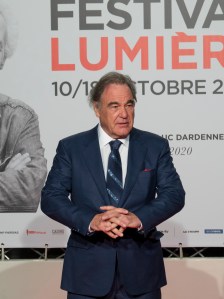 There were none of the usual speeches this year – the only two guests Frémaux invited on stage to speak were Jacques and Stéphane Audiard, the son and grandson of legendary French screenwriter and film director Michel Audiard, whose centenary is being celebrated throughout the Lumière festival.

Also invited to the stage, British musician and composer Steve Nieve played a 10-minute piano tribute to Ennio Morricone, who will be remembered at the festival along with Tonie Marshall and Michel Piccoli. Frémaux also made special mention of former HFPA president Lorenzo Soria, who passed away earlier this year.

By way of a conclusion, Frémaux beckoned his twenty-or-so guests to join him on stage for the traditional official opening line of the festival, which they are asked to read out loud, in unison and in French – resulting in a joyous cacophony which never fails to make the crowd laugh. While limited, it was a warm and enthusiastic crowd, which readily answered Frémaux’s calls to deliver loud applause throughout the ceremony in honor of this year’s guests.

The opening ceremony wrapped up with the screening of a fresh restoration by Gaumont of Georges Lautner’s black and white classic “Les Tontons Flingueurs” (“Crooks in Clover,” 1963).