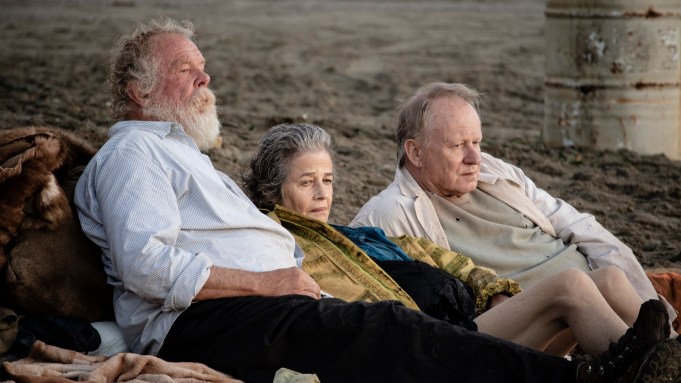 Jonathan Nossiter, one of the few American directors who was able to attend the Deauville Film Festival this year, didn’t make the trip for the Normandy seaside red carpet. He intended to shake people up with “Last Words,” a post-apocalyptic film set in 2086 which seems eerily prophetic.

Competing in Deauville, “Last Words” was part of the Cannes 2020 Official Selection and would have likely sparked some heated debate on the Croisette if the festival hadn’t been canceled due to the coronavirus pandemic.

Conceived as an allegory on the impact of the climate crisis, “Last Words” unfolds in a planet that has been ravaged. Europe is a vast desert and its population has been decimated by a virus. Survivors are living isolated, and while nature has perished and culture has disappeared from the world. It will take a young African refugee, played by newcomer Kalipha Touray, to bring joy and a sense of togetherness into people’s lives thanks to movies.

Inspired Santiago Amigorena’s book, “Last Words” starts out with the young man discovering old film reels in a Paris apartment, all coming from the “Cineteca di Bologna,” and meeting their owner, a former director (Nick Nolte) who has lost faith in everything.

Touray, a real-life refugee who fled Nambia two years ago and had never acted in a film, delivers a powerful performance opposite Nolte, Charlotte Rampling, Alba Rohrwacher and Stellan Skarsgård.

“I thought the last person of Earth should be an African refugee, someone who has already seen the end of the world,” said Nossiter. “Seeing (Touray) every day, radiant, intelligent and possessing such a strong instinct, brought (the rest of the cast) to be even more truthful, to surpass themselves.” He added that he and his Italian producer, Donatella Palermo (“Fire at Sea”), are currently trying to resolve Touray’s visa situation so that he can stay in Italy. It turns out, however, that under Italian law, Touray will have to either become a domestic farmer or a civil servant, a situation that Nossiter describes as “insane.”

Nossiter, who has now become an avid organic farmer living in Italy near Lake Bolsena (the largest volcanic lake in Europe), said he spent four years scouting for the film, a true passion project.

“We worked with a tiny budget, only a couple million, and everyone got paid the same salaries… We shot for four months in very tough conditions with a skeleton crew,” said Nossiter, who applauded Nolte’s courage to have endured such a rough shoot at nearly 80 years old.

“He has the courage of a lion… he’s a roaring lion and an extraordinary human being. He read every draft of the script, like (Rampling, Skarsgård, etc.). They were all collaborators,” said Nossiter.

Although it shot with a modest budget, the movie boasts a high production value, notably thanks to the cinematography and filming locations, from the Moroccan desert to Southern Italy and Bologna.

Nossiter said he was able to make the film thanks to Palermo, who gave him complete freedom to create the movie he envisioned. He noted that financing it in the U.S. wasn’t possible.

Following the movie’s screening in Deauville on Sept. 6, Nossiter didn’t want to take part in a classic press conference. Instead, he brought together local activists and farmers for a roundtable, notably Philippe Desbrosses, the co-founder of the A.B. movement in France and Europe; Perrine Hervé-Gruyer, the founder of the biological farm in Bec Hellouin; Diego Laporal, the founder of Pain Vivant in Bretteville-sur-Odon; Stéphanie Maubé, a farmer and mayor of the commune of Lessay; and Gilles-Éric Séralini, a professor of molecular biology at the University of Caen.

The director, who came on stage with vegetables and fruits from his heirloom seed nursery and organic farm in Italy, said “‘Last Words’ is meant to be a tribute to life; as art and culture give humanity its last laughter.”

“The film also says that farming and culture are intertwined… We must be activists today, we have no other choice… If we don’t do anything, Deauville will be like Tangier (in Morocco) in 30 years,” said Nossiter, who is best known for directing the 2004 documentary “Mondovino” about impact of globalization on wine regions. The doc competed at Cannes in 2004.

“Last Words” was one of the nine films from Cannes 2020’s Official Selection which were presented at Deauville and chosen by its artistic director Bruno Barde.

The Deauville American Film Festival kicked off with a vibrant speech delivered by the new culture minister Roselyne Bachelot. “Cinema is not about movies, it’s the collective experience of the big screen,” said Bachelot, who was followed on stage by Barde, Cannes Film Festival’s director Thierry Fremaux and president Pierre Lescure.

The Party Films Sales is handling “Last Words” in international markets and its sister company Jour2Fête will release it theatrically in France on Oct. 21.