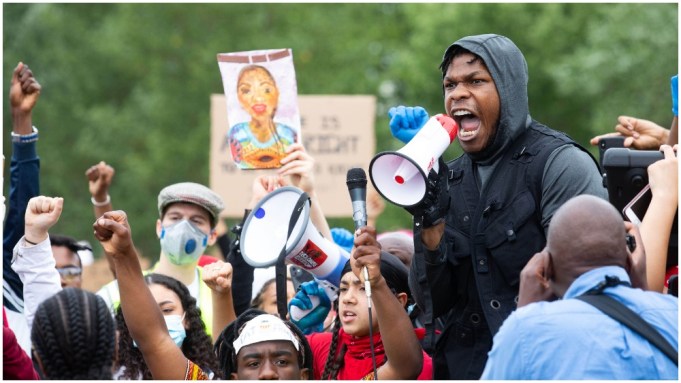 UPDATED: John Boyega was an unstoppable force at Wednesday’s Black Lives Matter protest in London — one of the city’s first major events in response to the death of George Floyd in the custody of Minneapolis law enforcement.

The “Star Wars” actor, a fierce advocate for the Black Lives Matter movement, spoke passionately to thousands gathered at Hyde Park for the afternoon protest, and joined demonstrators in the street as they marched to Prime Minister Boris Johnson’s residence at 10 Downing Street, with helicopters circling ahead and traffic — often honking and beeping in support — at a standstill.

“I’m speaking to you from my heart,” Boyega told the crowd. “Look, I don’t know if I’m going to have a career after this, but f— that.”

Permanently gripping a megaphone, Boyega was all emotion, at one point leading a chorus of protestors demanding justice for Belly Mujinga — a Black railway ticket officer who died of coronavirus after being spat on by a member of the public infected with the virus.

“This is a moment where we are now a physical representation of our mentality, of our shared idea that Black lives matter,” declared Boyega, who was frequently stopped in the streets by members of the public praising his advocacy and pulling him into an embrace.

“We have the right to live a balanced and healthy life,” he said. “We are a physical representation of our unity, and it’s very important at this time that we stick together in mind, in spirit and in body.”

The protest came a few days after Sunday’s protest in Trafalgar Square, where hundreds knelt in memory of Floyd, who died at the hands of law enforcement in Minneapolis, sparking ongoing protests out of the U.S. and ugly clashes with authorities around the country.

Lucasfilm expressed support for Boyega via the official “Star Wars” Twitter account in a statement on Wednesday.

“The evil that is racism must stop,” the statement went on. “We will commit to being part of the change that is long overdue in the world. John Boyega, you are our hero.”

The U.K.’s Black community similarly has a fraught relationship with police, which famously came to a head in August 2011 with the Tottenham Riots, which centered around the police shooting of Mark Duggan.

Duggan’s face appeared frequently on posters carried by demonstrators Wednesday, alongside depictions of Mujinga and Floyd. More protests are planned for June 6 and 7 in Parliament Square and the U.S. Embassy, respectively.