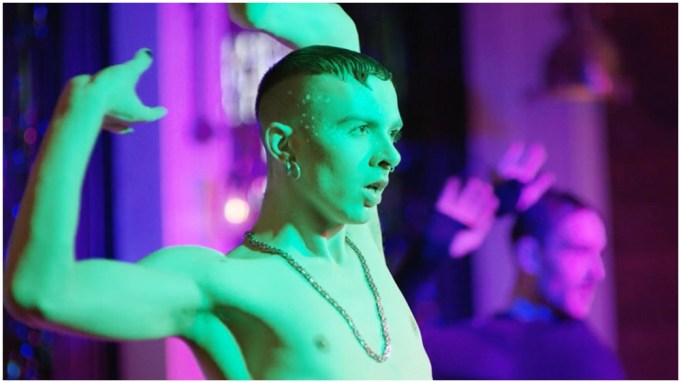 Voguing is a stylized dance form that originated in the late 1980s that harks back to the Harlem ballrooms of the 1960s. Interestingly, it has enjoyed renewed popularity in the north of England, spawning a movement known as Northern Vogue. Dancers from the north have formed ‘Houses’ that are as much about being a support group as they are about dance, with dedicated ‘House Mothers’ leading these houses.

“Deep in Vogue” celebrates the colorful, queer, emotional and political stories of Northern Vogue and its people. Over the course of a year, filmmakers Dennis Keighron-Foster and Amy Watson developed a relationship with the House Mothers and their members and charted the build-up to the Manchester Icons Vogue Ball featuring The House of Suarez, The House of Decay, The House of Cards and The House of Ghetto.

Through interviews and performance sequences set to the music of Crazy P and CVNT Traxx, some of the themes explored include the internal politics of Vogue to more external politics, like the disenfranchisement of black youth, LGBT issues, a shrinking welfare state, a dearth of art spaces and modes of expression, a reductive and commercialized gay scene and a lack of safe spaces for those who are different.

The film premiered at the 2019 BFI Flare Film Festival in London, won the 2019 Audience Award at the GAZE International LGBT Film Festival, and had its East Coast premiere at New York City’s NewFest 2019 OutCinema.

FilmRise CEO Danny Fisher said: “This moving documentary is a wonderful addition to our library of numerous LGBTQI films. Much like ‘The Miseducation of Cameron Post,’ and ‘Divine Divas,’ this film shines the light on individuals finding acceptance, love and a safe space of expression after years of feeling alienated.”

FilmRise will release “Deep In Vogue” Sept. 18. The deal was negotiated by Max Einhorn, VP of acquisitions at FilmRise and filmmakers Amy Watson and Dennis Keighron-Foster.

FilmRise was founded in 2012 by producers and financiers Danny Fisher, Jack Fisher and Alan Klingenstein.