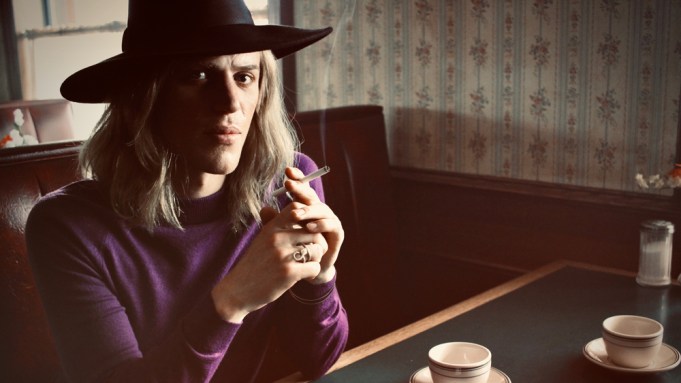 Variety has been given exclusive access to the first clip from David Bowie origin story “Stardust,” which receives its online premiere for distribution executives and select press on Wednesday.

The film, written and directed by Gabriel Range, was slated to premiere at the Tribeca Festival Festival this week, but due to its postponement the filmmakers decided to move forward with launching the film through a private online portal.

On Wednesday, Film Constellation, which is handling international sales, will launch a micro-site for the film. At 4 P.M. ET the company will host a live virtual introduction via Zoom with Range, and cast members Johnny Flynn, Marc Maron and Jena Malone. After the introduction, the invitees will be able to screen the film. The company successfully launched a similar initiative in late March for “Relic,” the Emily Mortimer-starring horror movie that was impacted by the cancellation of the SXSW Film Festival.

The film is set in 1971, when a 24-year-old Bowie embarks on his first trip to America, only to be met with a world not yet ready for him. The film reveals the inspirations and life events that gave birth to Bowie’s alter ego, Ziggy Stardust, charting the transformation of one of the world’s greatest cultural icons.

In a statement, Range said: “I set out to make a film about what makes someone become an artist; what actually drives them to make their art. That someone is David Bowie, a man we’re used to thinking about as the star he became, or as one of his alter egos: Ziggy Stardust; Aladdin Zane; The Thin White Duke. Someone I only ever saw at a great distance, behind a mask; a godlike, alien presence. Even in his perfectly choreographed death, he didn’t seem like a regular human being.”

The clip features a scene in which Bowie, played by Flynn, discusses his prospects in the U.S. with Ron Oberman, a publicist at Mercury Records, played by Maron. When Bowie reports that Mercury has doubts about his album “The Man Who Sold the World” and U.S. tour, Oberman says he has no such doubts. “I think you are going to be the biggest goddam star in America,” he says. “Seriously man this is a great record. It’s a great record. It’s just no one knows how to sell you in America.”

“Stardust” was written by Christopher Bell and Range. It was produced by Paul Van Carter, Nick Taussig and Matt Code. Executive producers are Fabien Westerhoff, Christopher Figg and Robert Whitehouse.

The film was produced by U.K.-based Salon Pictures, and is a co-production with Wildling Pictures in Canada.