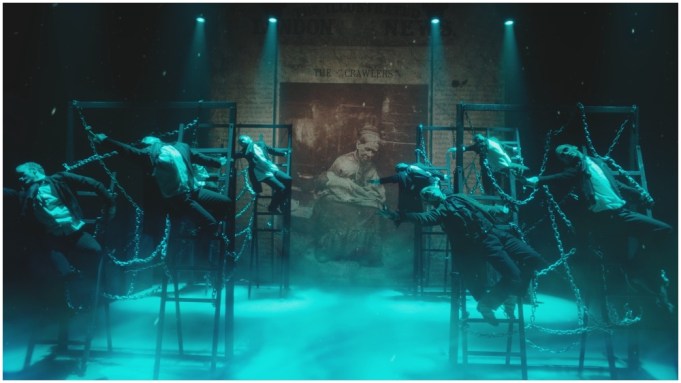 A new adaptation of Charles Dickens’ “A Christmas Carol,” with an all-star voice cast including Carey Mulligan, Martin Freeman, Daniel Kaluuya, Simon Russell Beale and Andy Serkis, is set for a Nov. 20 U.K. release across both cinemas and theaters.

This retelling of the classic Christmas tale follows a Victorian family as they prepare a toy theater for their annual performance of “A Christmas Carol.” The audience enters the imagination of one of the children and the cardboard stage transforms to reveal a magical world containing real dancers and stylized sets, with spoken narration.

With the British winter pantomime season — the financial mainstay of the theater scene — moribund due to continuing restrictions, producers Frith Street Films have taken the novel approach of releasing the film in cinemas and theaters in order to support both industries.

“A Christmas Carol” is directed by Jacqui Morris and David Morris (“Attacking The Devil,” “Nureyev”).

“My career started with working backstage in the theater. Theater continues to inspire and influence my work as a filmmaker today and I have been devastated by the current situation theaters face. Our version of ‘A Christmas Carol’ offers an immersive, theater-like experience for families both in cinema and theaters, [and] will delight those missing out on live dance and pantomime this festive season. I am thrilled to offer theaters a chance to screen the film to help raise funds and keep doors ajar until patrons can return in full capacity,” said director and producer Jacqui Morris.

“As families have bonded and are staying closely-knit during the pandemic, and although streaming platforms have been great through lockdown, now’s the time for families to get lost in an immersive film in a way that only cinema can provide. This is what cinema is best at and I think Dickens’ simple and moving tale of redemption and the power of giving will particularly resonate this year,” she added.

Choreography is by Southbank award winner and associate artist of Sadlers Wells, Russell Maliphant. Design is by Darko Petrovic, known for his blend of high artistry and diverse contemporary style, and the score is by Tony nominee Alex Baranowski.