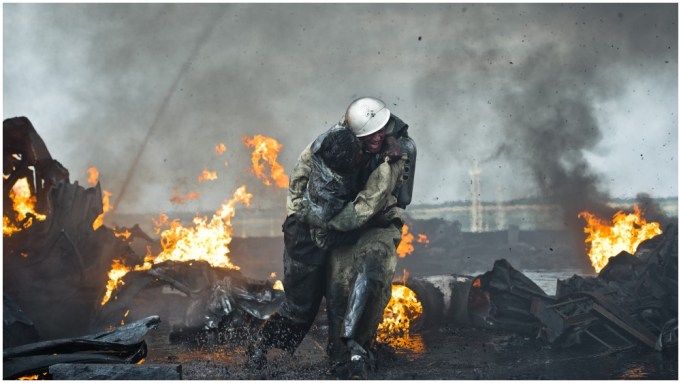 Variety has been given exclusive access to the trailer for “Chernobyl,” a big-budget action film about the aftermath of the nuclear power plant meltdown, directed by and starring heartthrob actor Danila Kozlovsky (“Vikings”).

Following on the heels of HBO’s Emmy-winning series, “Chernobyl” is the first major Russian feature film to depict the fallout of the explosion that rocked the nation and raised alarms across Europe. The film is produced by Academy Award nominees Alexander Rodnyansky and Sergey Melkumov (“Leviathan,” “Loveless”), Kozlovsky (“The Coach”), Vadim Vereshchagin (“Billion,” “Text,” “Son of a Rich”), and Rafael Minasbekyan (“Furious,” “Frontier”). Central Partnership is pre-selling the film during the Cannes Marché du Film Online.

“The story of the Chernobyl accident has always been a deeply personal one for me,” says Rodnyansky. Born and raised in Kiev, the powerhouse producer was an eyewitness to the catastrophe’s aftermath, filming the work of the emergency crews as a young documentary filmmaker. “It was both a historic moment and at the same time something absolutely terrifying,” he says. “Even then we could guess that the magnitude of the disaster was far worse than the official reports and that not only we, but all of our families, friends and relatives were at risk.”

“Chernobyl” follows Alexey, a fireman at the power station and an unlikely hero who must join forces with an engineer and military diver on a perilous mission to drain water from a reservoir under the burning reactor. With no time to plan, as water in the flooded corridors reaches the boiling point and the molten reactor core seeps ever closer, they’re prepared to sacrifice their own lives in order to prevent an even greater catastrophe.

“For me as an author and director, this film is about a lot of things,” says Kozlovsky, who also plays the lead role. “It’s about the 1986 accident itself, about how it changed the course of our country’s history. At the same time, the central theme of the film is about people and family. This event uproots the lives of an ordinary Soviet family and throws them into absolute turmoil. It’s about how they deal with this, and what it does to them.”

“To me the idea of making a film about Chernobyl was an effort to immortalize the people who gave their lives trying to save not only Russia, but Europe from the consequences of the worst manmade accident in history,” says Rodnyansky. “This is not a story about a power plant, but rather a story about ordinary people whose lives were lost, broken or fundamentally altered by the accident in Chernobyl.”