Catarina Vasconcelos on Fictionalized Documentary ‘The Metamorphosis of Birds’ 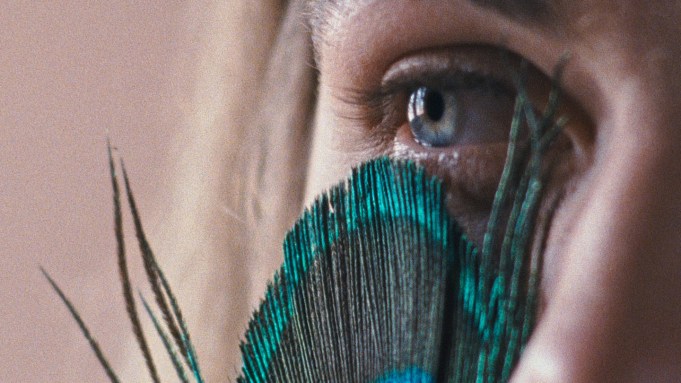 The fictionalized documentary “The Metamorphosis of Birds,” the debut feature from Portuguese director Catarina Vasconcelos, was the closing film of the Berlinale’s new Encounters sidebar. This week it screens at Ji.hlava Intl. Documentary Film Festival.

“Metamorphosis” explores the director’s family stories, building on elements developed in her debut 2014 short film, “Metaphor, or Sadness Inside Out,” which she filmed during her Master’s degree course in Visual Communication at London’s Royal College of Art.

The highly personal documentary explores her own family universe beginning with her grandparents, who spent many months apart, since her grandfather was a sailor. Her grandmother died of a stroke in 1984, two years before the director was born, and she herself lost her own mother in 2003, which both she and her father had to come to terms with.

The fictionalized, recreated family scenes feature over seven members of the Vasconcelos’ family, including the director herself. Budgeted under €100,000 ($11,100), the feature was produced by Portugal’s Primeira Idade, managed by Joana Gusmão and Pedro Fernandes Duarte. It was developed at the Arché workshop in Doclisboa 2016 and over three sessions of the Archidoc docu writing program, between 2015-2016, tutored by Susana Sousa Dias and Catherine Bernstein. It received funding support from Portuguese film agency, ICA, pubcaster RTP and the Gulbenkian Foundation.

Vasconcelos wrote the original music, in collaboration with Madalena Palmeirim. The helmer talked with Variety about her inspirations for the film.

Both your 2014 short and this feature seem to be deeply connected to your own family.

Absolutely. My studies in London occurred at the same time as Portugal’s severe economic crisis. Being away during this very difficult period, in which many people suffered great hardships, made me want to learn more about my country and my family. This wasn’t about nostalgia, or as we say in Portuguese “saudade.” I could have been angry about the situation and the fact that the values defended in my country since the 1974 revolution seemed to be under threat. But ironically it brought me closer. Above all, I wanted to learn more about my own family in order to understand who I am.

Where did you shoot the film and how much involves fictionalized recreation?

It’s essentially all recreated. I wanted to shoot in the original locations as much as possible, and with members of my own family. For the beginning of the film, I wanted to shoot in my grandparents’ house, but it was sold during the production period, so we chose a different location. We also filmed on one of the ships used by my grandfather – the Sagres training ship – which we made to look as if it was in the 1960s. All the nature scenes were shot in the Serra da Estrela, in the Centre of Portugal.

How did the idea for this film come about?

When I returned to Portugal in 2014, my father told me about a vinyl record, that had been recorded in 1957 with the voice of my grandmother, Beatriz. I was very surprised and it gave me the chance to hear her voice for the first time. I began conversations with my father and uncles about their mother. I was interested in the more mysterious side of my family. In the hidden spaces that no one talks about.

Does the film offer a view on what life was like for women in Portugal at the time?

That’s definitely one of the core themes. My grandmother had six children and my grandfather spent most of the year away at sea. She was effectively the head of the family. She also had a special link with nature, with plants and birds and I wanted to explore this in the film. The film has two parts, prior to her early death, in 1984, and then the subsequent period. But whereas the first part is fairly chronological, the second part is essentially timeless and has a more emotional and associative logic. The theme of how to come to terms with losing one’s mother is a key part of the film, because my father lost his mother when he was 36, and I lost my own mother in 2003, when I was only 17. In a way we were both semi-orphaned. By understanding how my father came to terms with the loss of his mother made me understand my own sense of loss better. It also brought us closer.

What was the inspiration for the title?

My grandfather called one of his children a little bird, and for my grandmother all her children were birds that she couldn’t control, who have a special lightness in relation to the land. The film also has several references to birds, for example, we see a dead bird at one point. The question of metamorphosis is linked to the idea of how the character portraying my father in the film, transforms into me.

Did you have any other inspirations for the film?

One of my inspirations was the 1972 book “New Portuguese Letters,” a compilation of letters, essays and poems by Maria Teresa Horta, Maria Isabel Barreno, and Maria Velho da Costa. The book was published two years before Portugal’s 1974 revolution and was a key first step in the country’s feminist movement. Through my film I wanted to explore what it was like, and is now like, to be a woman in Portugal, through the stories of my grandmother, my mother and my own story. At some levels, we have advanced a great deal and in others not.

Do we hear the vinyl recording of your grandmother’s voice in the film?

Only at the very end, to remember that she did actually exist. We hear the love letters throughout the film but they are read by her grandchildren. There is also a voiceover by myself, my father and mine and above all people close to family. The film has a strong genetic footprint!