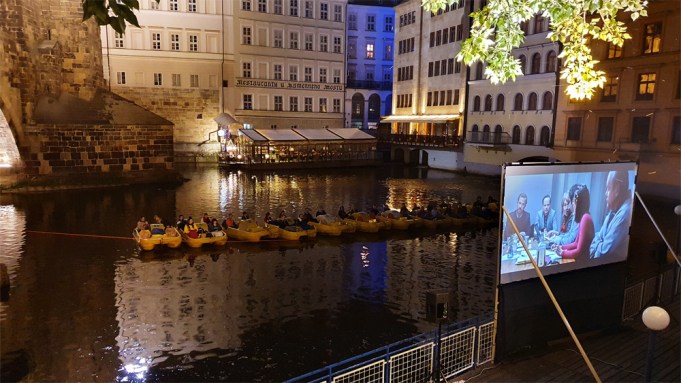 With many film lovers nervous about returning to movie theaters in the post-COVID era, a couple of Czech tech pioneers have come up with a service that enables films to be screened easily and legally in alternative settings, either outdoors or in non-theatrical venues, such as a bar or a restaurant.

On Thursday, Ctirad Hemelík and Vít Krajíček will present their innovative movie distribution service Artinii to industry players as part of Cannes Market’s NEXT section for cutting-edge cinema technologies. They are primarily targeting their service at community groups who wish to license films in order to stage one-off or limited-run public screenings of movies, while also providing rights holders with an additional revenue stream.

As Artinii is based in the Czech Republic it tested its service with a local film — “The Elementary School” by Oscar-winning director Jan Sverák. This was screened at more than 150 sites on the same day, earning more than $18,000. Recently, Kofola, a Czech soft-drink brand, arranged for more than 100 screenings to take place in restaurants.

The idea for Artinii was hatched when Hemelík was staging public screening events, but found he could license only a fraction of the films he wanted to, and even then was expected to use retail DVDs, which usually come with a warning message saying they are not for public screenings. “It was difficult to get these films, and it didn’t look right,” he says.

Nevertheless, he was making money from these screening events and resolved to find an easier way to offer such a service, and Krajíček provided the technical know-how to do so.

The ambition is to provide a fast and inexpensive service worldwide. “We can deliver the films very quickly anywhere in the world,” Krajíček says.

Rights holders upload their film to the Artinii database and receive payments when the movies are licensed. The films are sent to the customers, who screen them through the Artinii Cinema Player.

“It is very secure. All the films are watermarked and encrypted,” Krajíček says, referring to how films are protected from piracy. The service also ensures that films are only screened the number of times that were paid for.

The service is designed to appeal to small community groups with a common interest — such as those interested in feminist or LGBT cinema or an expatriate community. Films on a similar topic or theme can be easily found on the database. Those interested in films about ballet, for example, could license “Dancer,” starring Sergei Polunin.

The service seeks to offer a broad selection of films, with additional information, such as reviews. As customers return, the service will offer recommendations based on their previous bookings. Additional elements, such as interviews with the filmmaker, can be added to the events.

Pricing is set by the rights holders, Hemelík says, but it varies according to the relative wealth of the customers’ country, and the size of the audience.