Borat Sails Past U.K. Houses of Parliament in Mankini, But Londoners Remain Unimpressed 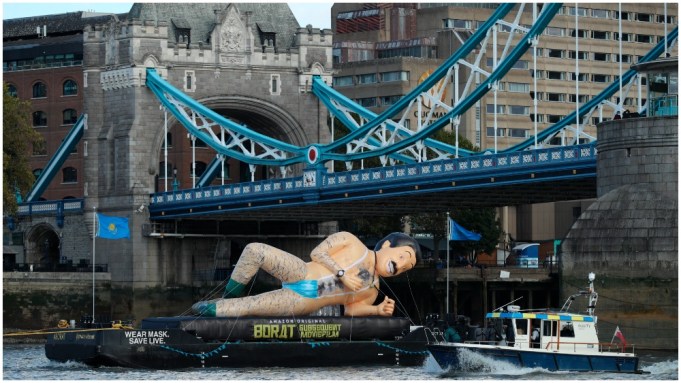 It’s not every day you see a giant maskini sail past the U.K.’s Houses of Parliament.

Amazon Prime Video pulled out all the stops in London on Thursday to promote “Borat Subsequent Moviefilm,” the sequel to the 2006 hit that bows Friday, with a surprise stunt along the River Thames featuring an inflatable, lounging and exceedingly hairy Borat wearing a surgical mask — and nothing else (video above). The small barge carrying the 40-foot float displayed a sign that read “Wear Mask. Save Live,” and traveled from Tower Bridge to the London Eye and back again over the course of an hour.

Amazon, which picked up the film in late September, has had just three weeks to hype up Sacha Baron Cohen’s sequel “Borat Subsequent Moviefilm: Delivery of Prodigious Bribe to American Regime for Make Benefit Once Glorious Nation of Kazakhstan.” And while the British comedian is well known to local audiences from his Ali G days on broadcaster Channel 4, the thong-clad Borat didn’t bring the throngs of fans you might have expected in the character’s heyday.

Most who witnessed the spectacle could be seen squinting to comprehend exactly what they were looking at. Borat’s mankini — traditionally neon yellow, but now a more COVID-safe affair — eventually prompted an amused click of recognition that, more often than not, gave way to apathy. Londoners may have had more on their minds with the country’s worsening coronavirus restrictions and rapidly rising new cases (21,242 on Thursday).

Stephanie, a guard stationed at Tower Bridge, where the barge set sail around 2 p.m., says she was surprised by the lack of inquisitive passersby along the river banks. “I got the feeling that unless you were a real fan, you just didn’t know about it,” she tells Variety. Indeed, even press were alerted to the event only around 11 a.m. Thursday morning, although a series of projected ‘Wear Mask. Save Live’ signs across U.K. landmarks and a fleet of 40 maskini-clad Borat lookalikes that stormed Bondi Beach in Sydney, Australia, should have been some indication.

“I was upstairs [in the office] and a lady there once dated [Baron Cohen], so it really made her day,” laughs the 30-year-old staff member. Tower Bridge staff are normally told about stunts that take place in the area, but not this time. “Everyone’s working from home,” she shrugs.

Stephanie says she doesn’t “expect anything less” from Baron Cohen, but takes pains to highlight the float’s over-the-top display of body hair. “The hair on him was a bit [grisly]. Someone had a very loose job on him. I would have done that a bit more tidily, but that’s just me,” she says.

Meanwhile, Amber, 22, was sightseeing from London landmark the Shard, a 95-storey skyscraper overlooking the Thames, when others at the viewpoint spotted the float down below. “We noticed there was a big person on a boat so we were wondering what it was, but we didn’t realize it was Borat,” she says, largely indifferent to the stunt, though she’ll likely see the film, she says, albeit using a family member’s Amazon Prime Video account.

Elsewhere, Daniel Harbison got a rude shock as he walked over London Bridge on his way to the bus stop, set to return up north to Newcastle after a short vacation in London. “I was a bit confused,” says a wary Harbison, “but then I remembered there was a movie happening.”

“It was easy to see what it was, but it was very quiet. You wouldn’t know it was actually there unless you looked to the river,” sniffs the 34-year-old. “I would have expected something bigger.”

Amazon has more stunts up its sleeve on Friday. “Londoners, keep an eye out for our COVID marshalls tomorrow,” the Amazon Prime Video U.K. account tweeted Thursday evening, with a photo of more scantily clad Borats posing on what appears to be the Millennium Bridge by St. Paul’s Cathedral. If only a mankini brought the same laughs it did a pandemic ago.