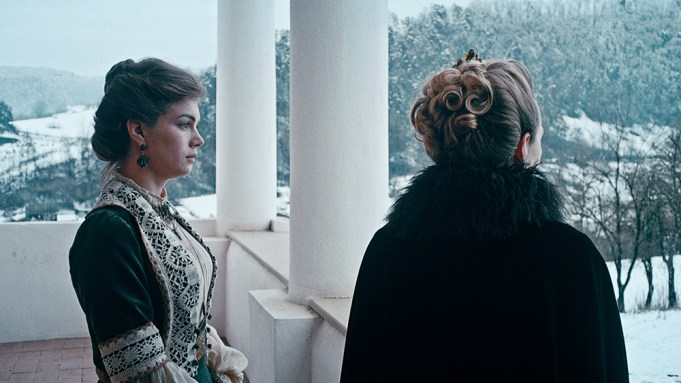 Variety has been given exclusive access to the trailer for Cristi Puiu’s “Malmkrog,” the opening film of the Berlin Film Festival’s new competitive strand, Encounters. Shellac is handling world sales.

“Malmkrog” is set at the manor house of an aristocratic landowner in Transylvania. Among the handpicked guests who have arrived to spend the Christmas holidays are a politician, a young countess, and a general with his wife. Over sumptuous meals and parlor games, the guests discuss progress and morality, death and the Antichrist. As the debate grows more heated, cultural rifts between them begin to emerge, and the climate becomes increasingly tense.

The 200-minute drama is based on a text by the Russian philosopher Vladimir Solovyov. “The problems posed by adapting a real event for the screen are to a large extent contiguous with those that arise in the case of creating a film version of a literary text,” said Puiu. “The risk of manipulating events or distorting the author’s intention in order to put forward your own ideas, seems almost insurmountable.”

The director described the challenge of adapting Solovyov’s “Three Conversations” for the screen as a “doubly onerous task.”

“On one hand, it must recreate an epoch, with its language, traditions and customs, and on the other, it must respect the spirit of ‘Three Conversations’ and thereby its author’s intentions,” he said. “At the same time, in regard to the cinema properly speaking, the text constrains me to reformulate a large part of everything that has to do with image, acting and setting within a story told in the past tense.”

He continued: “I decided to conceive the film as an interrogation on cinema and memory, allowing myself to imagine it step by step everyday, taking into account each vibration of the space, every change of the daylight, every fluctuation of the weather, every spasm of my intuition. These are the limits within which I plan to install my personal interpretation of a text that I consider to be, in many ways, prophetic.”

Puiu’s darkly comic “The Death of Mr. Lazarescu,” which won the Un Certain Regard award in Cannes in 2005, is widely credited with kick-starting the Romanian New Wave. His films “Aurora” (2010) and “Sieranevada” (2016) also played on the Croisette. He took home a Golden Bear on his last visit to Berlin in 2004, for his short film “Cigarettes and Coffee.”