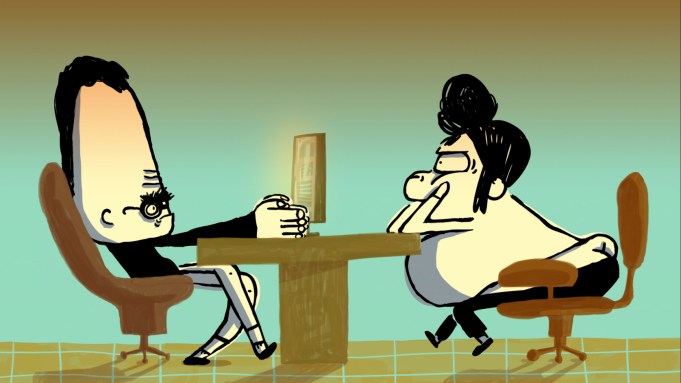 Presented in the Mifa Pitch forum, the short-format series “Douce” (French for “Meek”) offers a bawdy and irreverent look at modern maternity, centering on a 41 year-old force of nature with three kids to feed, one more on the way, and no use for social niceties.

Variety has had access to a pilot, which demonstrates this very well.

“The idea is to make a series of sketches to upend the image we have motherhood,” says show director-creator Isabelle Lenoble. “To treat the subject with a caustic look of somebody fed up with society’s ideals.”

“The ironically named lead is anything but meek,” Lenoble continues. “She has four children that range from infant to adolescent, which allows us to cover the full sweep of maternal links. But we also want to focus on her relationship to her own body, to her sexuality, which are aspects of maternity that are very rarely treated.”

Vivement Lundi! producer Mathieu Courtois calls the 15-part series “a mix of comic strip and sitcom,” and believes the project’s adult tone will hit home with a somewhat underserved demographic.

“Certain broadcasters think that interest in animation drops off at 25, but we made this show for people in their thirties,” says Courtois. “We never ask such questions for video games – where the majority of buyers are over the age 35 – so I don’t see why there is such a concern for animation.”

“Our generation grew up with animation, and it’s become a part of us,” he continues. “Programs like ‘Rick and Morty’ and [French web series] ‘Monsieur Flap’ show that you can reach adults as well. The demand is there, and we’re creating projects to push broadcasters along.”

With one episode finished and seven additional scripts written, Lenoble and Courtois hope to find a broadcast partner for a project they believe has cross-media appeal.

“This is hardly a Franco-French subject,” adds Courtois. “The series can travel, and can also exist as a comic strip, or in a magazine. So we’re looking for a publisher too!”