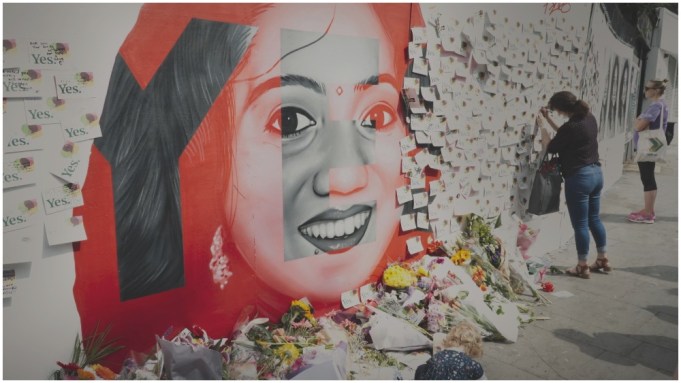 Variety has the exclusive trailer for a new film on Ireland’s abortion rights struggle, executive produced by Abigail Disney.

Set to premiere at the Hot Docs Film Festival this week, “The 8th” tells the story of Ireland’s campaign to remove its constitutional ban on abortion, known as the 8th Amendment, against the backdrop of the conservative country’s transformation into a more liberal, secular society.

Both sides of the abortion debate are represented in “The 8th,” though its primary focus is the female leaders of the pro-choice campaign. In particular, the film follows veteran campaigner Ailbhe Smyth and self-described glitter-activist Andrea Horan as they chart a strategy of grassroots activism.

Directors Lucy Kennedy, Maeve O’Boyle and Aideen Kane said in a statement: “When the government called a referendum to repeal the 8th Amendment, we knew this was one of the most important stories of our generation. Our goal was to document this defining moment in the context of Ireland’s historic treatment of women.

“This is one of the most divisive issues in the world but the Irish campaigners, on both sides of the debate, chose an alternative approach. Civility and civic engagement are critical to democracy and ‘The 8th’ demonstrates that even when issues are deeply felt and passions (are) near the surface, people can discuss, differ and choose a positive way forward.”

“The 8th” is produced by Black Tabby Films in association with Fork Films and Cowtown Pictures. Executive producers include Disney, whose doc producing credits include “Pray the Devil Back to Hell” and “The Armor of Light,” as well as Gini Reticker, Jess Kwan, Amy Nauiokas and Lesley McKimm.

The film’s U.S. premiere will take place at the Human Rights Watch Film Festival out of New York.