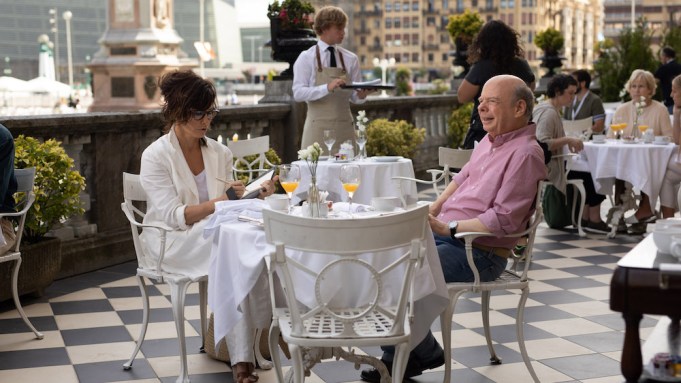 Produced by Spain’s The Mediapro Studio, Allen’s own Gravier Productions and Italy’s Wildside, the comedy will world premiere at Spain’s 68th San Sebastian Film Festival, opening the event on Sept. 18.

The setting of the world premiere seems highly appropriate for a film that takes place at the San Sebastian Film Festival and turns insistently, if the trailer is anything to go by, on the confusion of reality and fantasy.

Narrated by the husband of a married American couple, played by Wallace Shawn, who flies to the San Sebastian Film Festival, where he handles press, the trailer to “Rifkin’s Festival” shows the couple succumbing to the beauty and charm of Spain and the fantasy of the movies.

The wife, played by Gina Gershon, also succumbs to the charms of a debonair French movie director (French director-actor Louis Garrel) which sends Shawn’s character into an initial tailspin. He, however, in turn takes a shine to a beautiful and sympathetic Spanish woman (Elena Anaya) who lives in San Sebastian.

Lushly shot, “Rifkin’s Festival” marks Allen’s fourth collaboration with Mediapro, and exhibits the same picture postcard visuals of San Sebastian — its Concha Bay and verdant parks, for example — which were seen in Allen’s portrait of Catalonia in “Vicky Cristina Barcelona.” Both seem an homage to Spain, a country Allen says he loves. They also, however, appear to lend another note of fantasy to an already fairytale tribute to cinema and fantasy at large.

While Spanish and European support for the filmmaker remains strong, apart from a small call for boycott by leftist Basque party EH Bildu when the film was announced in July 2019, the decision to include and open the festival with a Woody Allen film has proved controversial, especially on social media.

Earlier this year, the filmmaker’s memoir “Apropos of Nothing,” was dropped by its original publisher after widespread criticism of Allen resurfaced, most notably from his son Ronan Farrow who has remained outspoken about alleged abuse his father imparted on sister Dylan. Allen himself has been steadfast in his denial of the accusations, and addresses them in the book, eventually published in March by Arcade Publishing.