Sundance 2020: Will the Market Be Colder After Last Year’s Spree? 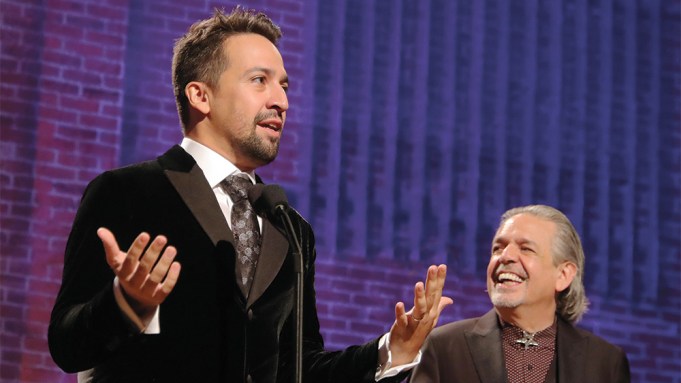 When it comes to big acquisition deals for independent movies, Sundance is the room where it happens, to borrow a lyric from “Hamilton.” So it’s a lucky coincidence that Lin-Manuel Miranda will be a guest at this year’s film festival.

For the first time, Miranda will hit the slopes in Park City, Utah, to rub shoulders with film aficionados and industry executives. He’s attending the festival as an interview subject in three documentaries, including “Siempre, Luis,” about his father, Luis Miranda, a dogged political consultant who helped organize a series of “Hamilton” performances in Puerto Rico to raise funds for hurricane relief efforts.

“We now have video proof that I’m the slacker of my family,” Miranda says with a laugh. The documentary, directed by John James, took three years to make. Miranda considers himself a fan of the movie — and the genre. “What’s exciting is how the resurgence for the love of documentaries and real-life stories has spilled into box office success, like ‘RBG’ and ‘Won’t You Be My Neighbor?,’ two wonderful documentaries,” he says. “The streaming revolution has absolutely helped people have access to films they wouldn’t have had access to, but I also think that’s awakening an appetite for these stories across all spaces.”

At least, that’s what movie buyers and sellers are hoping. The annual gathering in the snowy mountain town sets the temperature for the indie business. “Sundance is still one of the best places to sell an independent film, because it’s at the top of the year and not serving the awards season launches that you might see in Toronto,” says Rena Ronson, co-head of UTA Independent Film Group.

But experts say there are reasons why buyers might exercise caution in 2020.

Last year’s gathering was marked by some of the biggest splurges in the 41-year history of the festival. Amazon Studios spent more than $40 million on a slate — “Late Night,” “Brittany Runs a Marathon,” “The Report” and “Honey Boy” — that saw weak box office results (according to a January memo from studio chief Jennifer Salke, these titles reached record eyeballs at home on Prime Video, which is the primary objective of all original Amazon content). The streaming studio has since revised its distribution strategy, stepping back from releasing all of its movies on thousands of theater screens.

“Will it self-correct this year?” asks Christine Vachon, the producer and co-president of Killer Films, which has two movies — “Zola,” a drama about an exotic dancer, and “Shirley,” a psychodrama starring Elisabeth Moss — at the festival. “I know that’s what people are whispering. But I don’t know if that’s what happens.”

As a longtime Sundance veteran, Vachon knows better than to predict buyers’ habits until the closing credits roll. “There’s always something that comes from nowhere,” she says. “The fact that there are all these different buyers besides traditional theatrical buyers does make the market a lot more lively.”

The sale at Toronto last fall of Hugh Jackman’s “Bad Education” to HBO for nearly $20 million, plus a massive worldwide marketing commitment, could be enough to persuade others to consider TV pacts. It’s also possible that most traditional movie distributors will simply not have the cash to compete with new players, whether it be Apple or Netflix. Of all the movies sold at Sundance 2019, the most prominent success story was “The Farewell,” Lulu Wang’s drama starring Awkwafina. The A24 release, which the New York indie bought for roughly $6 million in a bidding war, earned $18 million in domestic theaters, although it’s struggled to replicate that success overseas, particularly in China, where the film is set.

Even if money isn’t flowing as freely, there will be no shortage of star power at Sundance. Taylor Swift will be onstage to kick things off with her opening-night Netflix documentary “Miss Americana.”

Hillary Clinton has agreed to trek in the snow for the launch of “Hillary,” a four-hour, in-depth docuseries that will premiere on Hulu in March. And there will be more politics in “The Fight,” a documentary about the ACLU standing up against Donald Trump’s policies. The project, which is produced by Kerry Washington, is from the team behind “Weiner.”

In a rare offering for kids, Angelina Jolie and David Oyelowo play the parents of a grieving family in “Come Away.” Their two youngest children escape despair at home in an inventive fusing of “Peter Pan” and “Alice in Wonderland.”

Prestige dramas could lure major studios looking for awards bait, such as “Worth,” inspired by the true story of the Washington lawyer appointed to oversee and distribute the September 11th Victim Compensation Fund. Michael Keaton takes the lead role, fighting off cynical bureaucrats and learning how to possibly equate monetary value to individual lives.

Anticipated follow-up films include one from Miranda July, who has not been to Sundance since 2011. Her “Kajillionaire” teams Evan Rachel Wood, Debra Winger, Gina Rodriguez and Richard Jenkins in a story about grifters who introduce a new member to their team. Almost a decade after “Martha Marcy May Marlene,” Sean Durkin returns with the family drama “The Nest,” starring Jude Law as an ’80s-era businessman.

Indeed, for most independent filmmakers, you can always go home to Park City. Justin Simien, who sold “Dear White People” there six years ago, is bringing his second feature to the festival. “Bad Hair” is a horror story — with an added layer of social commentary — about a killer weave.

“There’s a lot of really interesting original movies that are in the marketplace that are female driven or minority driven or black driven,” Simien says. “But at the same time, that same fear to take a chance on something that’s different is prevalent. I think the streamers m ake things really interesting, but this could really work in theaters. I’m enthusiastic about its prospects for sure. It’s a powerful piece. But it’s also a ride.”

And no matter what the price tags, so is Sundance.